The Museum of the Communist Consumer in Timisoara

"Dear comrades, visit your past!" This is the advice that the organizers of the museum give visitors. Who lived before 1989 remember those times, while for the others, the visit could be an unforgettable experience. 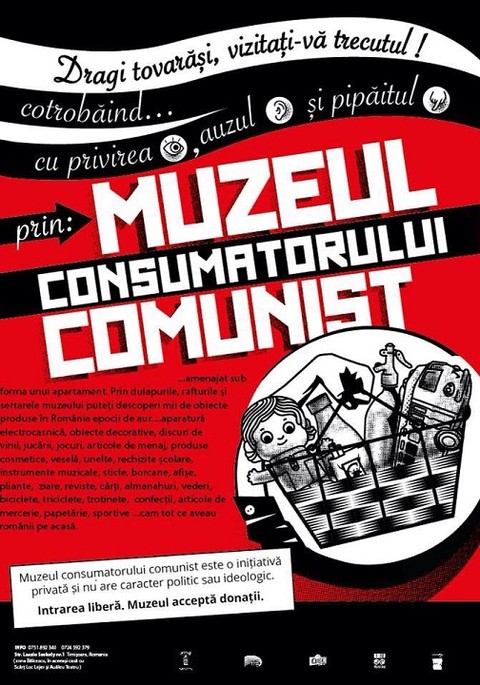 The Museum of the Communist Consumer in Timisoara

If you are interested to know what means to be a communist consumer, for sure you would like to visit the Museum of the Communist Consumer in Timisoara, arranged in an apartment where a collector has gathered over time several objects stored in the Romanians' houses coming from the communist period.

The apartment is in the basement of a building that also houses a cafe, a place for cultural events also. In this way, if you want to remember or to learn the everyday life of the communist Romania, the museum welcomes you at the entrance with symbols of Romanian Communism.

The creator of the project, independent of any political affiliation and ideology, organized the museum with the intention to set up a communist apartment with hall, kitchen, bathroom, living room and a room for children. You can admire objects used in the kitchen, at school, trinkets, musical instruments, newspapers, magazines, books, bikes and everything that could be found in the homes of Romanians. The flags and the pictures whit cranes and heavy construction, with workers and factories, make you forget that we are in 2015 and that all around you is only a museum collection.

You can start your visit from any room because the visual impact is the same everywhere. In the kitchen, for example, you will find a huge collection of bottles that today do not exist anymore and which Romanians could hardly get them before 1989. For example, the soda bottle with capsules is one of the attractions of the communist cuisine. The cooking devices and accessories, placed next to the current technology, they seem to be just some toys. Some of them are rarely found in the homes of Romanians who have thrown away everything that was no longer needed after the fall of the communist regime and the arrival of modern appliances.

The objects are gathered from everywhere: from markets, from attics, from friends and acquaintances, who often wanted to throw these things away. During the visit, you can tuch everything you see, you have the freedom to rummaging through cupboards and drawers, browse books and you can enter in an atmosphere which reminds some people of their childhood and youth, and others show how Romanians lived in the communist times.

For any information you will always find someone available to explain how they were using, or how they were transformed into more attractive objects, particularly by the teenagers at the time. An example of this is the bag received on defense courses that young people use as a school bag, in the absence of more modern and interesting.

So, dear comrades ... How does that sound?

The Museum of the Communist Consumer in Timisoara - workers

The Museum of the Communist Consumer in Timisoara - trinkets