Although a symbolic recipe of Cluj-Napoca, recognized as such by the rest of the country, it might in fact not have a lot to do with the city whose name it bears. 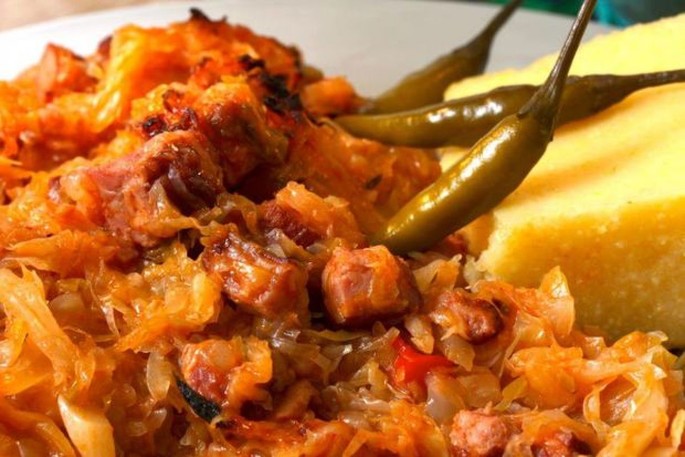 Although a symbolic recipe of Cluj-Napoca, recognized as such by the rest of the country, it might in fact not have a lot to do with the city whose name it bears. Hungarian food critic and historian, Cserna-Szabó András, says that people have always liked to name their foods after distant places. For instance, they have salade russe and German Wurst in Paris. Coincidence or not, this recipe is an emblematic dish for Transylvania, and the fact that it carries the name of Cluj only cements this even further.

The phrase “á la” comes from French and, in cooking-related contexts, has the meaning “as prepared in (a particular place) or by or for (a particular person)” (The Free Dictionary). Thus, the name of the recipe can be roughly translated as “Cabbage cooked in the style particular to Cluj.”

Cserna-Szabó András has also discovered that the recipe dates from at least the 17th century, when it was first mentioned in a cook book.  In those times, cabbage featured heavily in the menus of both the rich and the poor, especially as it was considered very beneficial to health.

Another historian from Cluj-Napoca, Lukács József, has discovered that during the 16th and 17th centuries, cabbage was often utilized and cooked in numerous ways. In fact, it was so popular, that some noblemen called it “the Transylvanian coat of arms”.

Lukács József has discovered a document from 1442, which records the first ever mention of this vegetable in the area of Cluj-Napoca. The document in question is a protocol that belonged to the Benedictine Church in Cluj-Mănăștur (the latter is the name of a neighborhood in present day Cluj-Napoca), in which a nobleman swore that he had not ordered that another nobleman be harmed, nor that his cabbage be confiscated.

The recipe that appears in the cook book from 1695 was quite lavish, containing chicken/ goose, minced cabbage, beef and ham, to which you added salt, pepper and ginger. But today there are so many ways of cooking Cabbage á la Cluj that it is difficult to decide what the standard is.

If you want to cook it yourself, you will need the following ingredients: 1 sweet cabbage weighing 1 kilogram, 600 grams of smoked meat (bacon/ home-made sausages), 4 table spoons of vegetable oil/ lard, 2 onions, 2 table spoons of tomato sauce, a quarter cup of rice and 4 table spoons of sour cream. Or, if you are ever in Cluj-Napoca, you can just stop at one of the cabbage restaurants (informally called “vărzării” from “varză”=”cabbage”), which, according to Cserna-Szabó András, do justice to the tradition and history of this dish.