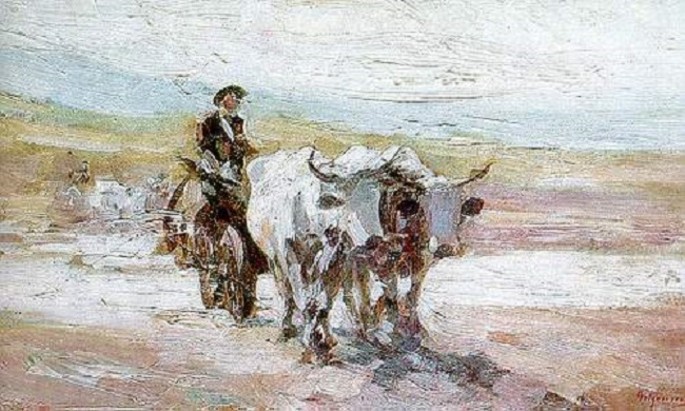 Painter Nicolae Grigorescu is part of the set of values Romanians take into consideration when speaking of significant personalities and not only. First and foremost, Nicolae Grigorescu’s paintings present the traditional world of Romanian village.

Even if his works did not focus only on that topic, Grigorescu became famous with Taranca din Muscel or Carul cu boi în luncă, works of art that indicate the traditional archaic side of Romanian village. Convinced that not the brush colored a painting, but the feeling itself, Nicolae Grigorescu is deemed the first modern painter of Romanian art within the culture evolution context from the late 19th century.

Also named “great interpreter of national romanticism”, simplicity and honesty define Grigorescu’s art; he found the optimal form of drawing the portrait of Romanian peasant and of presenting Romanian landscapes in an adequate form. Beyond that subject, which made his paintings renowned, Grigorescu became noticed by icon painting.

Given it, Grigorescu traveled abroad for researching the works of great painters and learning from them. Working in icon painting led to church painting and he became well known for having decorated Zamfira and Agapia monasteries.

Batrana cu gastele (Old woman with geese), Paznicul de la Chailly (Chailly guard), Interior de curte la Barbizon (Farmhouse yard), and Apus de soare la Barbizon (Sunset at Barbizon)are only some of the paintings Grigorescu made during the time spent in France, where he developed his own style and technique.

Given that he drew much of his inspiration from Romanian landscape, the 1877 Romanian War of Independence proved a special experience due to which his works were enriched.Having joined the soldiers as war reporter, Grigorescu painted Rosiorul (Cavalryman), Santinela (Sentinel), and Atacul de la Smardan (Smardan attack), the latter being deemed the most important military painting.

As in the paintings depicting the world of Romanian village, those in the war phase indicate another important time of the painter’s activity. At the same time, a significant difference is noticed between the sensibility used for painting the village, with herds grazing, peasant women spinning or girls in nature and the war scenes, filled with bullets and death.

Simplicity, honesty and talent…“You can paint by using a piece of coal and all paint tubes in the world cannot give you a flax flower’s blue color if you do not have it in your heart”, the painter said referring to his work.