The monastic complex of medieval art of Dragomirna 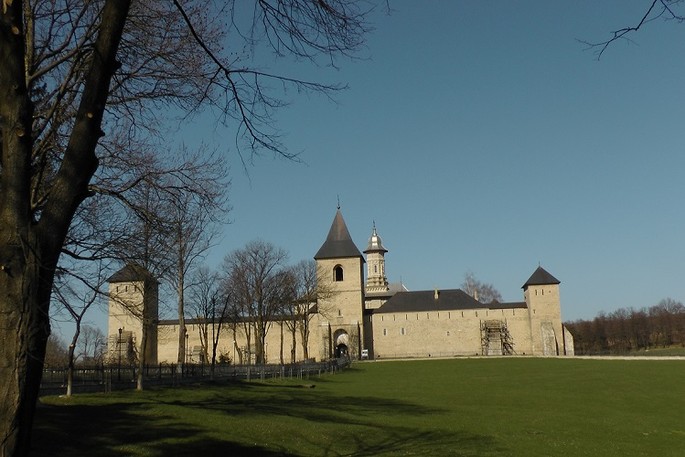 Located only 12 km from Suceava, the former capital of the kingdom of Moldova of the XIV-XVI, Dragomirna looks like a veritable fortress. The monastery of Dragomirna, although it was built and refined in several stages during the first decades of the seventeenth century, combines harmoniously different styles, concepts and foreign influences that have passed through the native filter, integrated and interpreted according to the traditions of Moldovian art.

Hence the impression of unity that gives this monument, synthesis between the old traditional background and artistic innovation elements that its creators have taken them, applied and developed to a level previously never met.
Therefore, Dragomira - with everything related to it as artistic creation - marks a distinct moment in the history of Romanian traditional arts. 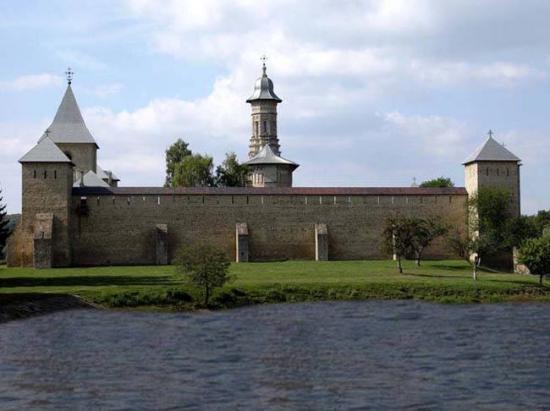 Located on the hill at the center of a former wide glade, mirrored in the waters that flow at the foot of its walls, with the massive towers at the corners, the monastery Dragomirna consists of a small church, a large church, the walls, the old building of the abbey, the five towers, the cells and the chapel.

The walls and towers

Dragomirna is designed, created and perfected during the glory of Movileşti, but it also knew the turbulent times of the early seventeenth century, which imposed protective measures such as the construction of the massive walls of defense, executed in 1627 by Prince Miron Barnovschi, high about 11 meters, never seen in any other Romanian monastery.

The walls respected the architecture of the fortresses, being composed of four towers at the four corners of the enclosure, given to each one a name of a personality, like: Barnovschi, Gheronchie, Silvestru and Arhimandritul. Besides the towers, which highlight the massive structure, there is the bell tower at the entrance which, with the artistic decoration with which it was adorned, is a real "mastepiece" of the complex. 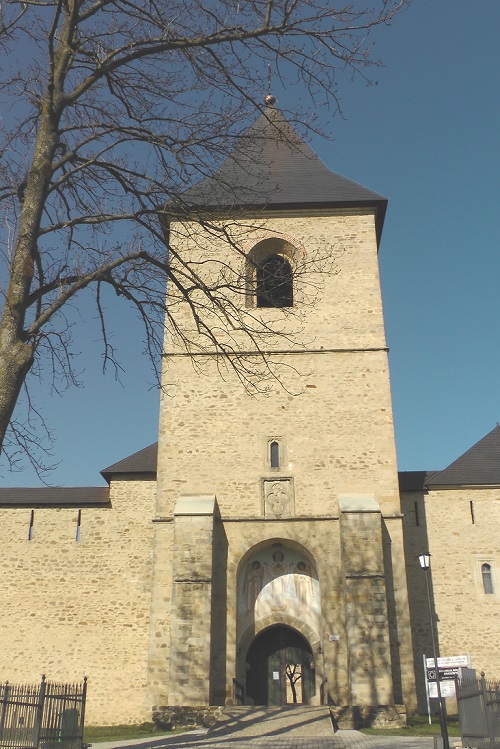 The tower houses a bell room, a chapel, and at the bottom is crossed by a gang in Gothic style which makes the entry into the convent, decorated with different elements in the form of plants.
The entrance, closed only by a wooden door, once covered by a bridge which covered the moat, is decorated with two rows of tiles with floral and geometric motifs carved in stone.

The most interesting piece, which is located above the ornate arch, is the inscription made in 1627 ordered by the prince Miron Barnovschi. The epigraph placed in a framework surrounded by a double-stranded like a twisted rope and held alternately left and right, contains the Moldavian emblem carved in stone with great finesse. 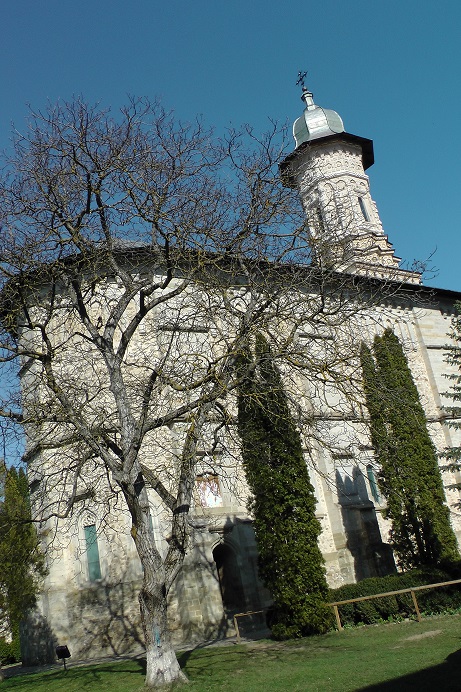 As a novelty in the Moldovian religious architecture is the unusually high proportions in the large church of Dragomirna, which exceed the normal scale of values. The height of the construction related to the width is too wide (L.35 / l.9,5 / h. 42), emphasizing even more the tendency of verticality.
If the churches of Bucovina of the XVI-th century are famous for their outdoor multicolored paintings, the monastery of Dragomirna follows the path of a new decorative system, namely that of the artistic work of the stone. 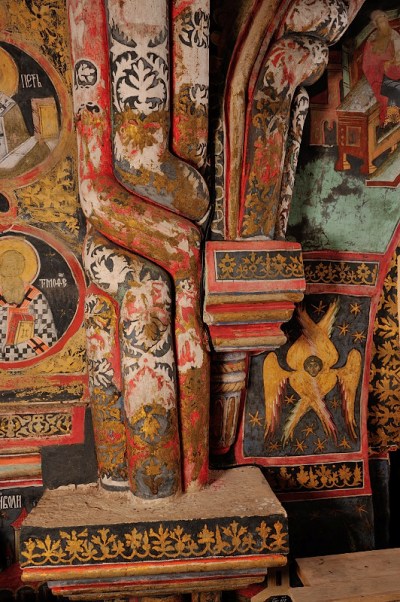 Here, the stone takes the place of the paintings and is molded to create unique decorative elements, such as the belt-decoration which collects three alternative bulls under the aspect of a rope. They say it was put here by Metropolitan Crimca to restore the symbol of the three Christian virtues: Faith, Hope and Love, namely the symbol of the Holy Trinity, a symbol that has to guide the Romanians in preserving the unity of the three Romanian principalities. Other decorative elements alternate between the Gothic style of a century ago and the late Moldavian Gothic style. The architectural decoration draws the eye upward, where there is the tower of the church. With the circular shape inside and octagonal outside, is the architectural element that crowns the nave and thanks to which the church exceeds the height of 30 meters. The richness of the ornaments and the beauty of the decorations, intertwined with the mastery of their combination, create the impression of embroidery of stone that stands out discreetly from the rest of the assembly to become the jewel of the monastery.

The interior of the large church The church, made up from the atrium, the nartex, the naos and the altar, was built in several phases. The access in each room is by climbing a few steps, so that the entire building is located above the level of the court. To enter the atrium of the church you have to climb seven steps, and till the altar there are seven more steps to climb.

The number seven, with a rich symbolism in the Holy Scripture refers to the seven sacraments of the Orthodox faith, the seven gifts of the Holy Spirit, and the seven days of creation week. Every step that leads to the altar contributes to the gradual ascent, creating a differentiation of the value of each room in part, to culminate with the naos from the altar, which is 1.55 m above the porch. The consecutive ascension of the four rooms of the church creates a unique impression, a "dynamic of space", never seen in the earlier buildings.

The collaboration of the three founders in the construction of the complex took place thanks to their strong spiritual affinity, common intellectual concerns. The monastic complex of medieval art Dragomirna reflects the cultural and artistic atmosphere of the period to which it belongs and is an important page in the Romanian history.