From a popular local product, Buzau pretzels grew into a national symbol 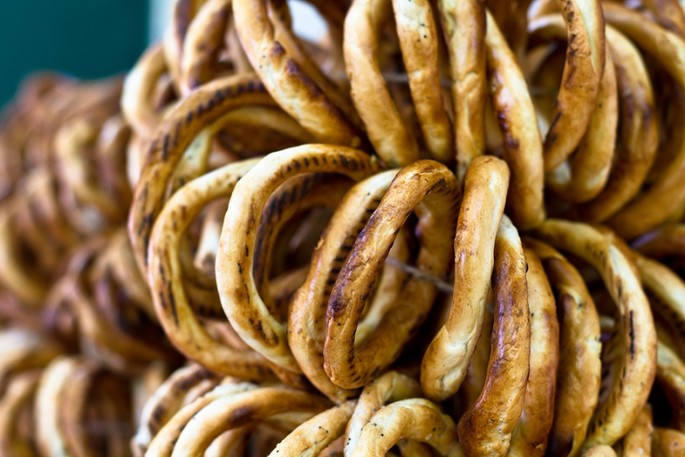 As the name itself indicates, the pretzels we are talking about come from the homonymous city. Nowadays you can find them in stores throughout the country, but Buzau is still their place of origin. The story of these pretzels is tied to the role that the Greeks once had in Romanian economy. As they were good merchants, they opened several barrelhouses in the city. There, besides wine, you could taste some ring-shaped pretzels.

The inhabitants of Buzau learned the recipe and today the pretzels are known as a traditional local product. There is even an annual festival of the traditional products of the area and pretzels are obviously always present. There are several official producers of these pretzels in the city, such as SC ADY COMP SRL Buzau, SC LIPIA SRL Buzau and SC BOROMIR PROD SA Buzau. By remaining faithful to the original recipe, but also by improving them with the tastiest ingredients, pretzels come now in several tastes: salty, poppy seed coated, chilly, onion, garlic, and rosemary.

Yet alongside the official producers, housewives also created the recipe for homemade Buzau pretzels. To begin with we need 500 g of flour, 300 ml of water, 1 sachet of yeast, 1 teaspoon of sugar, 2 teaspoons of salt, 3 teaspoons of sodium bicarbonate and 5 teaspoons of sesame, poppy seeds, salt etc. Mix 100 ml of water with 100 g of flower, the yeast and the sugar. Let it ferment for about a half hour. Add the rest of the flour, the water and the salt and let it rest for a half hour. Put it in the oven at maximum heat and line a pan with parchment paper. In a pot boil three liters of water and then add sodium bicarbonate. Use the palms of your hands to shape pretzels and boil them. Let every pretzel boil for a minute and then take them out on the pan. Sprinkle with salt, poppy seeds, sesame etc. Put in the oven for about twenty minutes until they turn golden-yellow.

You can often buy them hung on a string, like a huge tasty necklace. Therefore you don't have to go all the way to Buzau to taste the traditional pretzels in the city because they actually became a symbol of the Romanian pretzels.