The Palace of Parliament in Bucharest, the heritage of the communist era and the emblem of the Romanian democracy

The Palace of Parliament is listed in the Guinness Book of World Records because of its area of 365,000 square meters. 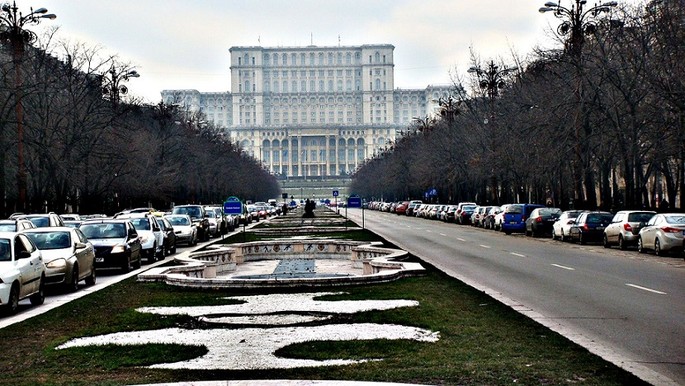 Each capital city must have an emblem, a hallmark which should become a symbol of the whole nation. A metropolis without greatness does not attract too many tourists and therefore fails to become famous. Probably this idea echoed through Nicolae Ceaușescu’s mind during the Golden Age of Communism when he decided to raise the colossal edifice called the People's House. Its construction began in 1984 and combines elements of traditional Romanian architecture, predominantly Brâncovenesc style.

Definitely The Palace of Parliament is the most controversial building in Romania, due to its history, the design of the construction and its utility. Many people believe it is a “pharaonic” construction which shows the desire for power, the cult of personality and megalomania, and that its architecture is kitschy. On the other hand it is an imposing edifice with a special charm and the Unification Boulevard with the multitude of fountains which lead you in Constitution Square in front of the People's House do its part.

The Palace of Parliament is listed in the Guinness Book of World Records because of its area of 365,000 square meters. It is the second largest building in the world after The Pentagon and also the most expensive one. The edifice is 12 stories tall with 8 underground levels and it was designed by the 28 years old architect Anca Petrescu, who was the leader of a team of about 100,000 workers. The largest chamber is called Unirii Hall and it has a sliding roof which can allow a helicopter to land in the room. Its carpet weighs about 14 tons and it was woven right there with machines specially created for this purpose. For the chandeliers were used about 3,500 tons of crystal, the largest weighs 3 tons and it has 7,000 light bulbs.

The building has about 1,000 rooms, mostly unused and it houses the Chamber of Deputies, the Romanian Senate, the Constitutional Court and the Legislative Council. Also, the Palace hosts many conferences, symposiums, seminars, economic, social, cultural, scientific activities and exhibitions. The Palace of Parliament is open to be visited by tourists, in possession of a valid identity document.

Every capital city in the world can be recognized by a building, a museum, a street, a statue, a park, etc. Perhaps it was not built with this purpose, but we can say with certainty that the People's House became a symbol of Bucharest. Some would prefer its demolition because it reminds them of the communist regime and consider it a symbol of waste and of a dark era, while others see it as an overwhelming building and as a tourist attraction. In conclusion, the Palace of Parliament remains a legacy of the communist era which after 1989 became a symbol of the Romanian democracy.

For more information visit the web page www.casapoporului.ro , the Bucharest International Conference Centre section on the website of the Chamber of Deputies (www.cdep.ro ) and Guinness World Records website (www.guinnessworldrecords.com/world-records/heaviest-building  ).