The Gugu Peak, a place shrouded in mystery, which is said to "disappear"

The Gugu Peak of the Godeanu Mountains is one of the most mysterious places in Romania. Tourists from all over the world are attracted to "the mountain that disappears," considered a sacred place by the Dacians 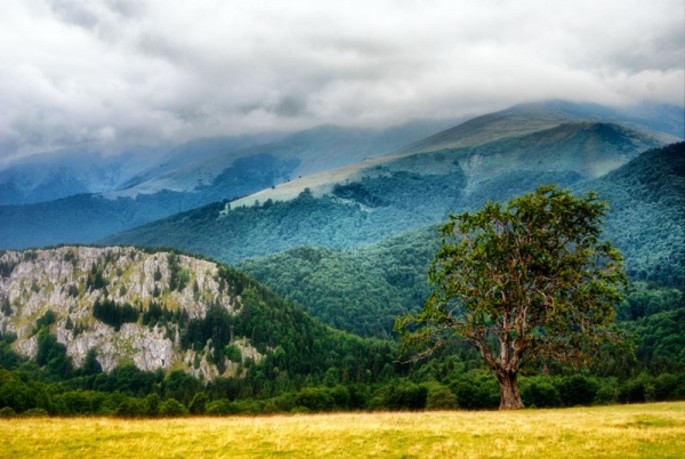 Tourists passionate by strange phenomena, which do not have heart problems, but only a good physical condition, can climb the peak Gugu, a quite mysterious place. It is said that Mount Gugu is one of the strangest of Romania. This is because people say that at certain times of the day, the peak can no longer be seen. Thus, the peak Gugu is also known as the "mountain that escapes the eye."

Experts agree with the locals and they say that this camouflage of the peak Gugu is real, because here happens a complex meteorological phenomenon.

In addition, tourists who have climbed the peak Gugu have seen explosions that gushed from the mountain, which, in reality are ball lightning. Even if scientists have found an explanation for these strange phenomena that occur in the mountains Godeanu, visitors are drawn like a magnet to this special place.

Tourists can visit the peak Gugu and Cracul Peşterii, where happens another spectacular phenomenon, the reflection of the sun’s rays. From the cave it can be seen the stars even during the day. For this reason, fans of paranormal phenomena believe that this place has an energy charge.

The Gugu Peak, the holy mountain of the Dacians

The Gugu peak is located in the Godeanu Mountains, near Retezat, at an altitude of 2,291 meters. The massif is visited not only by fans of the paranormal, but also by history buffs. The legends say that the peak Gugu is the sacred mountain of the Dacians because here was the home of Zamolxe, the supreme god of the Dacians, who are also the ancestors of all the Latin people.

Locals believe that, for these reasons, on the peak Gugu is a hidden part of the Dacian treasure, hidden by Decebal, because the spirit of God will protect it. So that the tourists coming to this place, on the Jiu Valley, should not be surprised if they meet the treasure hunters on the road. Jules Verne wrote about peak Gugu while Victor Kernbach thinks that the massif is one of the "essential energy points" of the Earth.