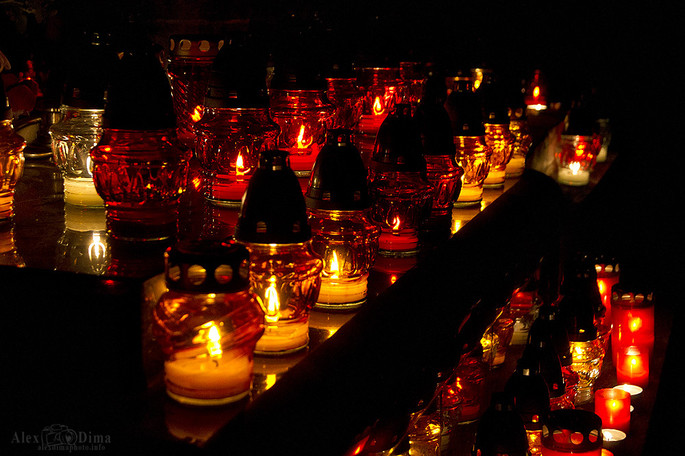 In most religions around the world, there is some form of celebration of the souls of those no longer alive. And Romanian Orthodoxy is no exception. Just as Americans celebrate Halloween on the 31st of October, so do Romanians celebrate The day of the dead on the 1st of November. On this day, people usually go to the cemetery, clean up their loved ones’ graves and adorn them with candles and flowers. They take time to remember the departed and say a prayer for them. Sometimes, priests are asked to officiate sermons.

It is a beautiful holiday, as the cemeteries, normally scary places, are teeming with people and are alit with thousands of candles. It is not so much a day for sobbing over the dead, but of rejoicing over their reencounter. Reencounter, because it is believed that the gates to the two world (the real one and the afterlife) open and the souls can cross over and meet with those living. It is one of the rare days when people laugh and make jokes in the cemetery.

So, on this day, Romanians take the time to remember the good things about the people they have lost, say a prayer for their souls and light a candle on their grave so that they can find their way more easily.

The resemblance with Halloween is not a coincidence. In fact, this holiday was borrowed from the Roman-Catholic tradition in the 20th century, as it hasn’t always been celebrated. As proof, this day is only celebrated in those parts of Romania where the Roman-Catholic influence is stronger, namely, in Transylvania, Banat and Maramures.

The Day of the Dead is a Celtic celebration, but was brought over to Romania by the Catholics. In the Roman-Catholic, Anglican and Protestant traditions, the 1st of November is called The All Saints Day, and is a celebration of saints. On the 2nd of November, these religions celebrate the deceased. In Orthodoxy, there is also an all saints day, celebrated in spring, and as a consequence, only the celebration of the dead was retained for November.