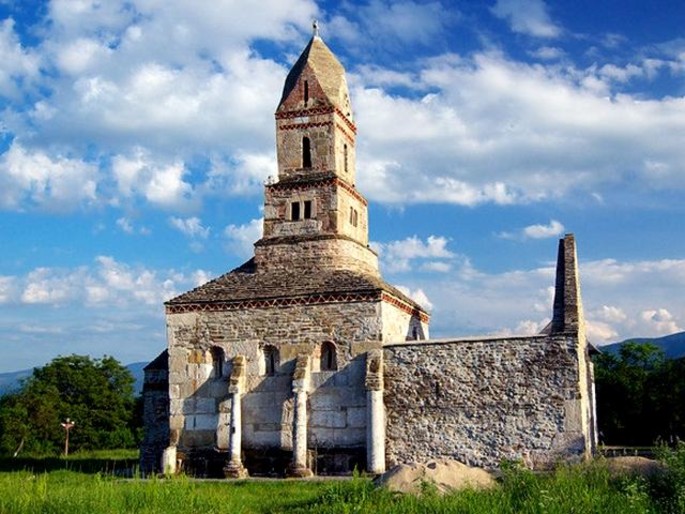 In Densuş, just ten kilometers from Haţeg, there is the church of San Nicola, the oldest church in Romania and in the South-East of Europe. The church looks like a bizarre structure, composed of Dacian, Roman, Gothic and Orthodox elements.

The history of the place is strongly connected to the existence of the Christian worship which, according to the early writings on the church and the village, was built in the late 13th century.

The opinions on the dating of the church are rather controversial. Some historians say that instead of the church, in the second century, there was a pagan temple dedicated to the god Mars. After the Romans left the country, the pagan temple passed to the Christian religion and, since then, Masses were celebrated in the church till nowadays.

Other historians claim that before the arrival of the Romans on the site of the church there was a temple dedicated to Zamolxe, where Masses were celebrated and was run by monks. Archaeological excavations have unearthed a pitcher with the written "Koson", that is, the Dacian king Koson that could afford to stamp out its own gold coin, which moves the building dating long before our era.

Beyond the opinions about his age, the church Densuş has a history full of mysteries and controversies that gives the aura of the strangest church of Romania and even of Europe. Why so many mysteries? Because its walls were built with Roman gravestones, Dacian stone blocks, columns and capitals from the site of Sarmisegetuza Ulpia Traiana, controversial inscriptions and decorative statues that make that many historians cannot accept the official position. Thanks to the fact that several Roman monuments were set in the building of the church, they were saved from destruction.

The church rests on eight Roman tombstones. The columns inside the church are rather unusual and they carry inscriptions in Latin and Dacian. These are Roman pagan altars, tombstones or stars, placed one above the other, and the altar is placed to the south, while all Orthodox churches have altar eastward.

"Inside the monument is a precious mural painting dating from the first half of the 15th  century, which adorns the altar’s semicircular apse, the eastern walls of the nave, parts of the central pillars, and outside, above the entrance door into the nave, the patron icon. The painting from 1443 belongs to the artist Stefan Zugravul, his signature can be read under the apse’s southeastern window. The complex wall painting combines syncretic traditional Byzantine iconography with narrative and realistic elements, typical of the beginning of the Renaissance in a vision with folkloric traits" (description on the label at the entrance of the church).

From the architectural point of view and with all the changes undergone by the Church in the course of its existence, the church of Densuş cannot be framed as part of a certain artistically age, because it is an amalgam of specific architectural elements from different periods.

Although it officially dates back to the XII-XIII century, many consider it a Dacian building or even older. Due to its characteristics, the building is known as the most unusual in the area of ​​Haţeg but also across the country. The church was included on the list of monuments proposed to become part of UNESCO heritage.