The Trajan's Column in Bucharest 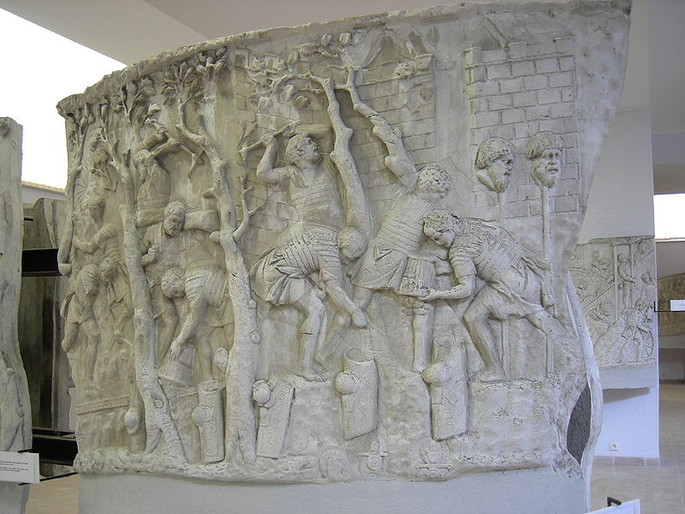 In the Historic Center of Bucharest, on Calea Victoriei No. 12, there is a monumental building, the former Postal  Palace, built in 1984 (in neoclassical style). From 1972, the palace houses the most important museum of history and archeology of Romania, National Museum of History.

Here they were brought the most famous treasures, pieces of great historical and archaeological value. Millennia of history unfold in front of the viewer: from the Paleolithic (the prehistoric epochs), passing through Antiquity, the Geto-Dacian epoch, the Roman epoch and later the Middle Ages, reaching the modern era, to the beginning of XX century.

Together with  the memorable temporary exhibitions opened on the premises, or in other places in the country or abroad, the museum has three permanent exhibitions: The Historical Treasure, The Lapidarium and The Trajan's Column.

In the courtyard of the old palace was built a modern building body, with the Lapidarium destination, from concrete and glass and star-shaped roof, where is exposed to a full-scale a copy of the base of the Trajan's Column in Rome and copies of the scenes depicted on this extraordinary monument of the antiquity.

The idea of a copy, belonged to several  writers and art Romanian people, since century IX, but only  through the years 1939-1943 it was made, the merit belonging to the archaeologist Emil Panaitescu, who was then the director of the Romanian School in Rome. The reproduction works were made by craftsmen from the Vatican, under the supervision of Francesco Mercatalli.

A true book of history, in images which scrolls scenes chronologically during the conquest of Dacia by the Romans led in battle by Traian. Between the important  scenes with historical significance, regarding our Dacian ancestors, are the following: the battle at Tapae the (year 101), the  portrait of Dacian king Decebal, the scene of peace since 102, the bridge over the Danube built by Apollodorus of Damascus, the scene of sharing the last reserves of water, the catching of the Dacian treasures by the Romans, the suicide of the King Decebal (who preferred death than obedience) and the presentation of the Decebal's head in front of the Emperor Trajan. On this majestic monument, the Dacians, although a defeated people are portrayed in dignified poses, denoting a great respect and admiration from the winners part.

The Trajan's Column in Bucharest - Decebal, the Dacian King

The Trajan's Column in Bucharest - the head of Decebal

The Trajan's Column in Bucharest - the suicide of Decebal

The Trajan's Column in Bucharest - the Tapae battle