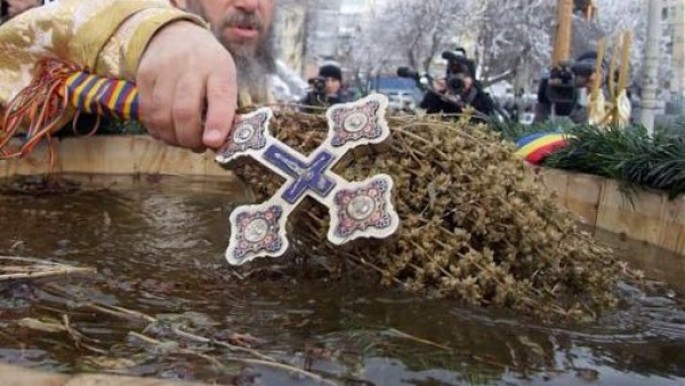 The Epiphany, called in Romanian “Boboteaza”, marks the end of a series of ceremonies that mark ritually the end of the Old Year and the beginning of the New Year. There will be no more carols on the streets.

As the name suggests, the Epiphany hallows in the Christian calendar, one of the biggest holiday, namely the Baptism of the Lord. In every house, on this day, comes the priest to bless the house. This crucial moment was projected on the background of the archaic beliefs. If by the act of Christmas carols was enshrined the space (the homes, the fields, the borders of the country) now the essential feature of the moment is to drive away evil spirits from aquatic space.

The water is blessed by the Church (holy water) and then it will be used to bless the houses, the cattle, the fields. In order to be suitable for this act, the water is not enough to be blessed by the church. There is an ancient custom called "Păzitul Fântânilor", which consists in guarding a fountain by a group of carolers, which necessarily must include fellows, and guard the whole night through ritualistic songs and dances, to keep the water clean.

In some Romanian villages an ancient custom is still practiced, namely “Încuratul Cailor”, which consists in leaving the horses to run freely on the streets of the village, their act purifies the air.

In the belief of the ancestors, in this period the house is visited by the spirits of the dead who come to eat what they find on the table, for the next year. Now, for the Epiphany, they come back in the "World without Desire". For this reason, on this night, people have to light ritually big fires in order to illuminate the path of those who are traveling to the other world.

Also, the day of the Epiphany is a magical day, when you can discover the predestined person, when magic and spells are made. Thus, in Maramures, the girls make a bunch of green plants or put it in the river. The more it "catches" ice flowers, the richest will be the man they marry.

The guys instead, on the eve of the Epiphany, the use to fast, make a "pogace" and eat it seating where the priest stood at the table.  In this way they are convinced that they will dream the predestined.

Ritual foods of this day are the pork aspic and boiled corn. They are given as charity for the souls of the dead.