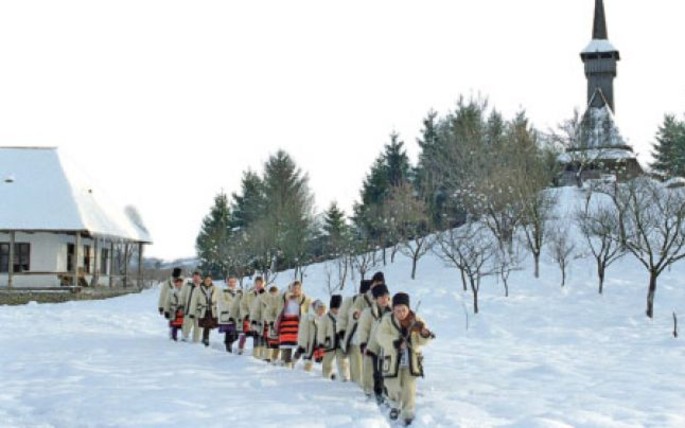 St. John the Baptist is one of the most important figures of the Orthodox and popular hagiography. From theologically point of view, Saint John means "God's grace" or the one that God has given us[1].

Sântionu, as it is called in the popular tradition, is the feast of St. John the Baptist. In the evening between 6 and 7 January, carol songs are sung for the last time in this cycle of the winter holidays. Carols are sung in each household, but in some parts of the country, the sing also "love songs" (eg, ”În grădina lui Ion” that stands for "In the garden of Ion" etc.).

This moment is known in the traditional space as the "iordănit". The members of the group of singers (who in the past were exclusively men) gather on the eve of the Epiphany and go from house to house, spraying the family members with basil dipped in holy water from the church (in some areas, like in Transylvania, for example, visit the houses with girls to marry and sprayed with perfume ...).

Children and marriageable girls are trapped by singers and lift up, while other members of the troop scream.  The gesture has a meaning of good luck and brings the subject health and suitors ... in the year to come. Elsewhere, all encounters are watered, usually with water, as a sign of fertility, abundance and health.

The "iordănitori" in return receive gifts, such as Christmas carols, such as drinks, pork, bread and money. With all these gifts the boys organize a big party that virtually closes the cycle of winter holidays.

A noteworthy tradition to this day is called the “iordănit” of the women. In this evening women celebrate only between women, drinking and dancing, without any fear of being reprimanded by men. In other words, it is the traditional Women's Day (used in the country side, and not on March 8, the day of women celebration invented today, for reasons of political and ... commercial propaganda). The women gathered in one of the houses of the village, bring food (eggs, flour, meat) and drink for the party. So, they celebrate all night, drinking, singing and dancing, saying that they "se iordănesc"[2].

It is more than obvious that we are dealing with a type of carnival manifestation, where any rules are abolished, just like all manifestations of this kind, and the excesses of food and drink are passed sight, even for women. Is the raison d'être of all these holidays, which mark the end of the old year and the beginning of a new age.