Inhabitants of Bucharest of all times have favored healthy, delicious and satisfying food. The culinary history is strongly influenced by the historic events happening to the city, and every ethnic group settling in the capital of Wallachia and, later, of Romania, left its influence on traditional cuisine. 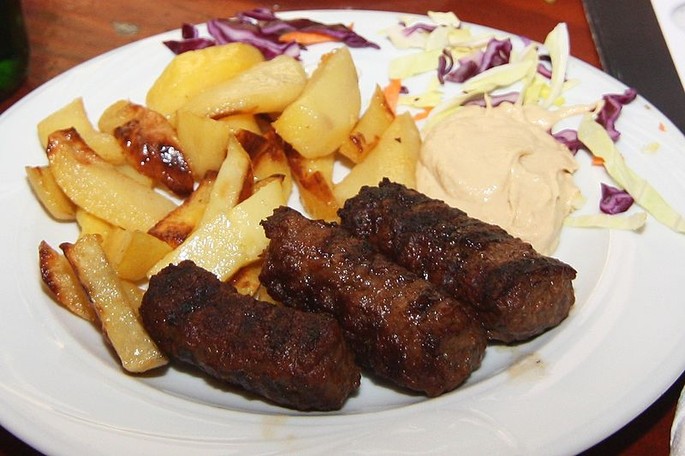 The cuisine of Muntenia – the historic area situated on the Romanian Plain and including Bucharest – has an ancient tradition of a harmonious mix of meat, vegetables and dairy products.

The characteristic cooking procedure is boiling:

Broths are specific to Muntenia and Bucharest. No respectable menu starts without a good "ciorba" a broth made with meat, vegetables and borsch (a natural ferment with a poignant sour taste). The origins of broth as a meal are Russian, but in Muntenia it grew into a specific, traditional meal by adding local seasonings and vegetables.

Even if times changed the culinary preferences, some meals are staples of Romanian cuisine and will always remain on top of the preferences among the inhabitants of Bucharest:

At the present, the cuisine specific to Bucharest and Muntenia in general is the result of the joint “cooking” of various ethnic influences of the minorities which settled and integrated into the Romanian society along the centuries.

The Fanariot occupation was a troublesome period in the 18th century for Bucharest, but the settlement of an important number of Greek families had a strong influence on the food that could be found on the people’s tables. Olives, unknown to Romanians until then, became a staple for entrees and an important ingredient in stews and steamed meals. The Greeks also taught Romanians to eat consistent salads, with cheese, tomatoes and cucumbers, or with fish and vegetables, as a stand alone course.

During the 19th and 20th centuries, the strongest influences on Romanian cuisine come from Western Europe, especially from France and Italy. Mayonnaise, Mediterranean salads, seafood and the replacement of sunflower seeds oil by olive oil were enthusiastically adopted by the inhabitants of Bucharest, always in search for delicious food.