One of the most important pieces of Romanian metal architecture, along with Brancusi’s Endless Column 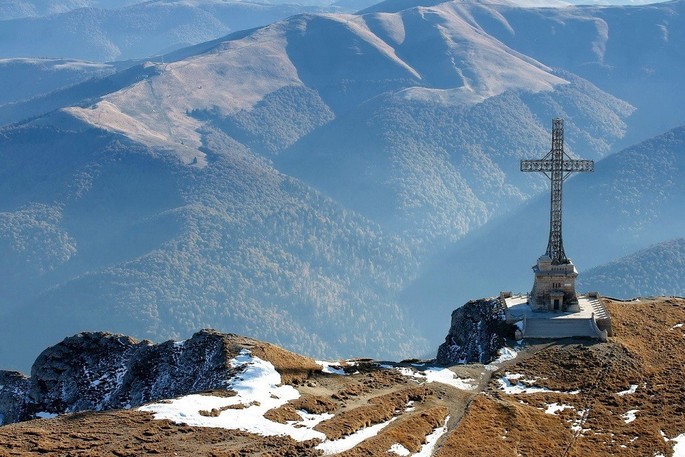 The Heroes’ Cross on Caraiman Peak was recognized by the Guinness Book of Records as the highest summit cross in the world in 2014. Built between 1926 and 1928, at the initiative of King Ferdinand and Queen Marie of Romania, the monument is located almost at the top of Mount Caraiman, at an altitude of 2,291 meters.

The Heroes’ Cross was designed by the architects George Cristinel and Constantin Procopiu and its purpose was to celebrate the memory of the Romanian soldiers who fought in World War I against the Central Powers. The desire of King Ferdinand and Queen Marie was that the cross would be visible from as big a distance as possible.

The monument was built with metal sleepers and the actual construction was done by the Heroes’ Cult Society. The building materials were transported by train as far as the Busteni rail station (Busteni is the nearest city) and from there to the peak, by oxen or by the funicular owned by the Busteni Paper Mill.

The cross is 39.3 m high, of which 8.35 m is the pedestal it is mounted on. The pedestal was built in 1930 and until then, the cross had been buried directly in the rock. The arms of the cross are each 7 meters long.

Until 1939, it was lit by 120 light bulbs of 500 W, while today it is lit by 300 bulbs of the same intensity. Before 1939, the cross also used to have an electricity generator that was located in the pedestal, but now the power comes from Costila radio relay complex, through underground cables.

The saddle of the mountain, where the monument is located, offers a spectacular view of the Prahova Valley, of the city of Busteni and of the Ciucas Mountains. The cross itself is a spectacular view as well, as it can be seen from miles away, especially on the night of the Dormition of the Theotokos (August 15) and on the Ascension day, when it is lit.