For thousands of years, the Olt River passes through the Lotru, Capatanii, Fagaras and Cozia Mountains over some unique scenes 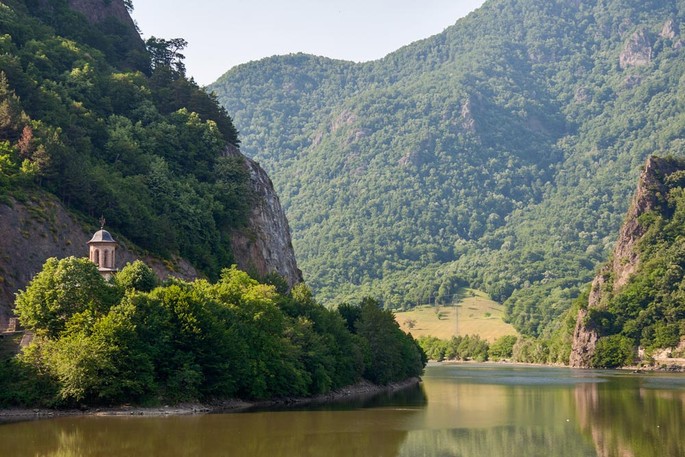 The Olt Defile – one of the most significant valleys crossing the Carpathian Mountains - it goes from TurnuRosu to Cozia in a spectacular landscape divided in three sections corresponding to the geographical features it crosses. The TurnuRosu Defile, with a length of 17 km, located between the main peaks of Fagaras and Lotru Mountains. Between Caineni and Brezoi, we can find the central section.

Cozia Defile (18 km) surrounded by high stone walls forming the most spectacular section which crosses the Cozia Massif and the western extremity of the Capatanii Mountains. After Calimanesti, the Olt River leaves the mountain area, passes by Ramnicu Valcea and crosses the Romanian Plain until the Danube. Historical and architectural monuments are found almost on the entire route beginning with

Turnu Rosu (Red Tower) – initially it was a defensive military building erected by Saxons in 1360. There is no location without a Roman fortress, an old church or a memorial house. The next village after Turnu is Boita which has a castle documented for the first time in 1453. To the south, a monument of the 17th century is located – Schitul Corneni.

On the left bank of the Olt River, one of the most important Roman roads in Dacia was built which connects Transylvania with the Danube. The road was used for military and commercial purposes for the transportation of the salt mined in the Transylvanian mines that went on the Danube towards the Black Sea.

Another important site is the Roman fortress of Arutela whose ruins can still be seen today next to the Turnu Monastery. The current road was made with the secret support of the Oltenian boyars before Oltenia was annexed by the Austrians. In 1717, the road was named Via Carolina after the name of the Charles VI emperor. The road assured the commercial and military transportation for four wheel vehicles. Therefore, it was once again significant after a millennium and a half. However, in contrast to the ancient Roman road which was located on the left bank of Olt River, Via Carolina was built on the right bank of the river.