Magic and Cure Plants may have the power to marry girls, bring luck to love and fertility in marriage; it may increase milk quantity in cows, act fortunately on business, may bring wealth and, generally, in all circumstances, prosperity and harmony, etc. 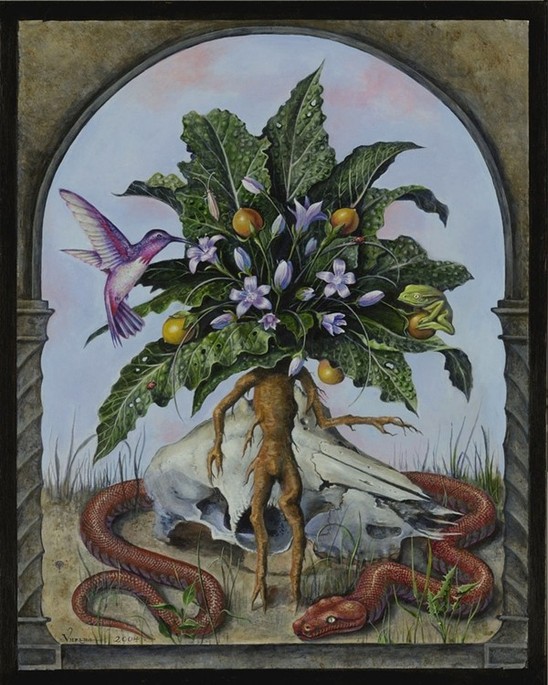 Usually, gathering magic plants requires a certain skill from actants (female, rather than male), a certain time, a specific place, as well as particular date of the year. But it seems like no other plant needs so many stringencies than the mandrake, when picked, processed, used etc.

The ideal gathering time for this plant is July: ”In certain parts of Ardeal, two women are being paid to gather the mandrake, as some of them must be aware of the time for gathering. These women take all sorts of drinks from the tavern, followed by bread, salt, dust and a coin, after moving them three times around a barrel, contrary to the movement of the sun. The mandrake is revolved around with all these things, whilst praying and wishing the tavern customers to leave the place with an empty pocket. After being gathered, the plant is set in the wine barrel, or a part of it inside drinks. They say, about some taverns, that people go there as they are roped in by the mandrake.” (Dikol, Kristian & Miriam, ”Black Magic and Witchcraft”, Iași, Polirom, 2005)

Same is underlined again by Victor Kernbach, one of the important researchers of Romanian mythology, in general: ”Gathering such a plant is not performed at random, but undergoing a compelling ritual, with the gatherer bearing the obligation of erotic cleanliness, silence, secrecy and loneliness and having to pick the mandrake by using only their teeth, in full moonlight; this deed is sacrificially paid with bread, salt, sugar and wine. The girl gathering the mandrake must first dance around it (dancing is sometimes performed in a couple). Mircea Eliade, who offered an analytical approach to this complex popular cult, would notice that: „Magical virtues of the mandrake explain, in a weird manner, the strange destiny of this plant.” (Victor Kernbach, The Mythical Universe of Romanians, Bucharest, Lucman Printing House, n.a., pg. 328).

According to the same Romanian researcher, the mandrake plays an essential part in erotic charms, with such plant holding an exceptional purpose in maintaining the flame of love or, if in need, turning around a person whose love had faded away. ”The mandrake root may, indeed, have a direct influence on human or natural vital forces: it has the power to marry girls, bring luck to love and fertility in marriage; it may increase milk quantity in cows, act fortunately on business, may bring wealth and, generally, in all circumstances, prosperity and harmony etc.” (Victor Kernbach, The Mythical Universe of Romanians, Bucharest, Lucman Printing House, n.a., page. 328)