The Romanian women of Banat contributed consciously by their smoothness to the European Art. 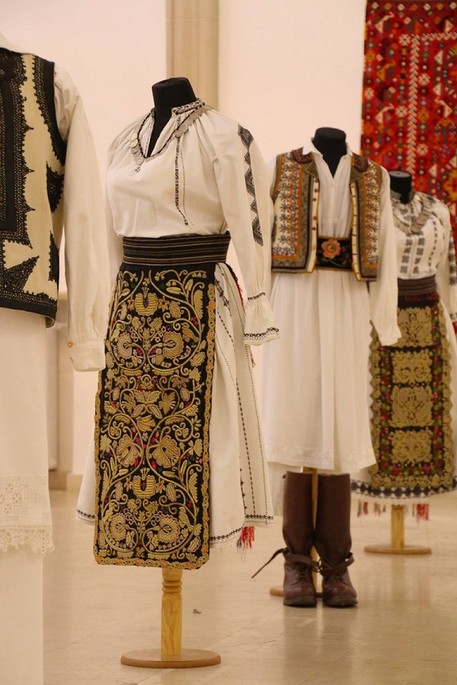 In Giroc, a suburb of Timisoara, there is the Marius Matei Ethnographic Collection, one of the largest collections of Romania. The collection includes over 1,000 pieces dating from the late nineteenth century and early twentieth century. It also includes traditional costumes from Banat, lowland and mountain areas, specific for more sub ethnographic areas, silver salbe (silver traditional necklaces), furrier’s pieces, and other gorgeous pieces embroidered in gold and silver thread. A

s specific ornaments for the Banat there area can be mentioned the conciul or the cialmaua (a head coverings, made of a special fabric for this piece, and wear on the wedding night and on the great feasts of the year), the  comașă or the gălan (band of silver coins with some ribbons at the nape, which was carried over the braided hair before marriage and over the cârpă or batic after marriage but without ribbons, and only at the great feasts of the year) and the tulbent made of money (a head covering that contained about 100 silver coins and weighed about 5-6 kg, specific only for the plain area of Banat).

The folk costumes from Banat are the finest, the most elegant and the most expensive compared to the other regions of Romania. The fabrics used in their creation are the most sophisticated. Besides the cotton fabrics made in house, the traditional costumes were also made by sada, which is a cotton fabric brought through a Serbian channel and it was used more by women with a modest condition, by men or it was used for making clothes for winter, or georgette and crệpe de Chine, used only for women's clothing.

The decorations were made with red, brown, black, purple, yellow dotted with black, bordeaux dotted with yellow, purple silk thread  but also, rarely, with white thread for men’s clothes or for women’s clothes with a modest condition.

The fact that this collection has been accepted in the aforementioned museums attests the high exhibition’s value.

Part of Marius Matei’s collection was contained in a catalog entitled Tezaur Bănățean, edited by the Astra Museum, recognized as a scientific work and a reference book for Romania. The National Museum of the Romanian Peasant has published a book entitled Marius Matei Portul Bănățean that includes a broad description of the traditional cloths of Banat and its accompanying accessories.

The passion for journalism and especially for the tradition’s preservation and for the authentic heritage, involved Marius Matthew in many projects regarding the traditional crafts, almanacs, and other articles of many other fields.

Marius Matei, a fiery of what is old and beautiful, seeks to recover the wisdom and truth of the popular culture. The science of collecting of the heritage created by the ancestors can be done only by people wearing a deep respect and care for the ancestral heritage, animated by real passion, curiosity and a deep study.

Traditional vestments are the historical heritage of a nation. Each as different as beautiful reflects the specific area, the social status, the age, the membership of a community and the position that they occupied within it.

All this create a kind of fabric language that precedes much any form of writing.

The recovery of the traditional costumes, of the sacred customs and of the magical dimension of the ancient world contributes to the salvation of the collective memory.