Cheia Monastery - a national monument of ecclesiastical art located at the foot of Ciucas Mountains, between the Tampa and Cheita streams, against a magnificent natural background

Situated at an altitude of 897 m, on the border that once separated Wallachia from Transylvania, the monastery was a means of connection for the Romanians on both sides of the Carpathians 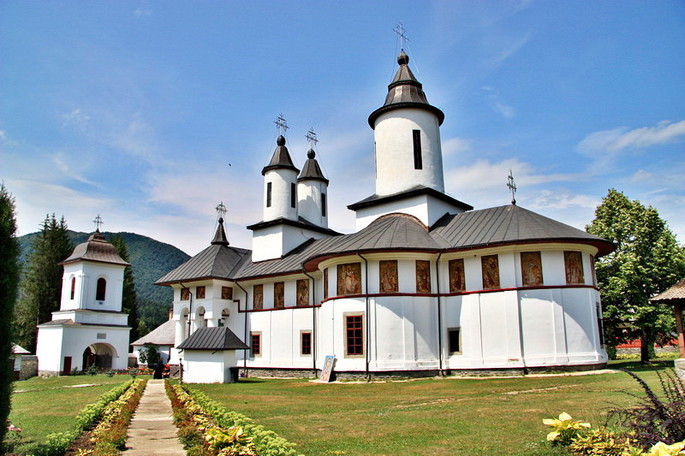 From the very beginnings of this place of worship, pilgrims, believers, city dwellers, shepherds, locals or just people from other areas passing through found in this wonderful place, loaded with spirituality, easing and peace of mind. Testimonies report the existence of a wooden skete, built by herdsman from Sacele around 1770. The existing church, dedicated to the “Holy Trinity” and “Dormition of the Mother of God”, was erected between 1835 and 1839, by two hieromonk brothers from Transylvania.

The Cheia Monastery church is a genuine architectural masterpiece realized in a traditional Wallachian style by the local master builders. Naum Zugravul is the one who realized the interior and exterior fresco, which impresses with its beauty and art. The golden, sculpted wooden altarpiece, realized in a Baroque style by Viennese builders, is a jewel, a true work of art. The royal icons, of a rare beauty, are the work of the Romanian painter Gheorghe Tatarescu. They were silver coated at a later time by master Lazar from Ploiesti.

The church is surrounded on three sides by the monks’ cells, built in 1844. The chapel dedicated to the “Dormition of the Mother of God”, erected between 1924 and 1927, has a tower above the naos, which is oil painted, in a Neo-Byzantine style, by Grigore Ceopiu. The magnificent stalls and the sculpted cherry tree wooden altarpiece, a work by the sculptor Profilescu, majestically complete the masterpiece. Over time, a small settlement developed near the monastery, initially called Teleajan. This is the Cheia mountain resort of our days, which enjoys an outstanding landscape and highly-ozonized air, favorable for the treatment of various illnesses.

Various forms of tourism are available here, from mountain hiking to mountain climbing, winter sports and mountain biking, trips and visits to Cheia Monastery, Suzana Monastery, Maneciu Lake. Cheia is only 60 km away from Ploiesti and 130 km away from Bucharest.