Lipscani, the medieval heart of Bucharest, became the main artery of promenade of the modern city 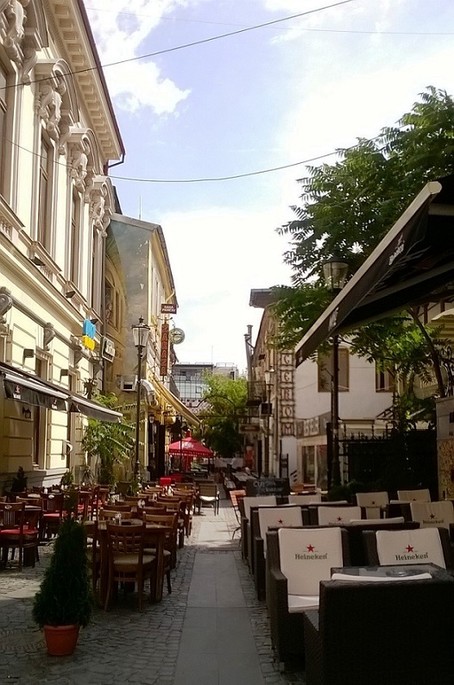 The narrow and cobblestone streets guide the steps up and down beside the old buildings full of history, legends and nostalgia of the past.

The Lipscani Street (documented in 1589) is one of the oldest thoroughfares of Bucharest. "Ulița Mare" or "The Big Street", as it was once called, was the main place of trade and crafts of that era. From here passed merchants of various nationalities: Romanians, Greeks, Bulgarians, Serbians, Jews, Armenians, Albanians, and Austrians, who brought goods from famous fair in Leipzig. Hence their name of "Lipscani" given to dealers and which further gives the name of the street.

They came from different parts of the world have and left their mark on the architectural styles of the buildings, which has led to a variety of styles. Nowadays, on the same streets there are houses with shops on the ground floor, modern restaurants, terraces that extend into the street, bars, clubs, musicians from place to place, playing gently old or new music, in an environment permeated by history and mystery.

On the French street (named so after the French traders who had settled here) are the oldest medieval artifacts in Bucharest, which today makes up the whole "The Old Court -The Princely Palace." It seems that the first walls were built in the late century XIV - the beginning century XV, by Prince "Mircea the Elder"(Mircea cel Bătrân). Later, in 1458, Prince Vlad Tepes, strengthened and transformed the fortress into a royal residence. For two centuries, the rulers of the Wallachia used "The Royal Court" from Bucharest in parallel with the other from Târgovişte.

A number of princes have widened and rebuilt the court several times but the main building, the buildings of the guards, the watchtowers and the bathrooms were built in the period 1690 -1714 by Prince Constantin Brancoveanu. According to descriptions of the time, "The Royal Court" was placed on a hill surrounded on south by a high coast of Dambovita river and the other parts by strong walls.

The architectural ensemble has also the oldest church in Bucharest - Saint Anthony Church - founded by Prince Mircea Ciobanu, between the years 1545-1554. The narthex of the church is covered by a hemispherical dome and the nave is provided with spire.

The decoration of the facades is made of strips of brick veneer exterior alternated with strips of plaster. Under the eaves there are a row of niches which along with a semicircular pedestal built with bricks, brings a plus to the architectural style of that era.

Every Tuesday the church yard is full of faithful who come to pray to the icon of "St. Anthony the Great", considered to be a "miraculous" one.

Tired of walking, the traveler can rest in the garden of ”Hanul lui Manuc” or The Manuc's Inn, to rest and to quench his thirst and hunger. After that, the journey can be continued until late at night, when the rustling of life and fun is at the highest level.