Between the counties Harghita and Covasna, at 950 m altitude, is the beautiful volcanic Lake St Ana. It is surrounded by mountains, which are draped in coniferous forests that keep the area cool in the summer. It is the only lake in Central-Eastern Europe that was formed in the crater of an extinguished volcano 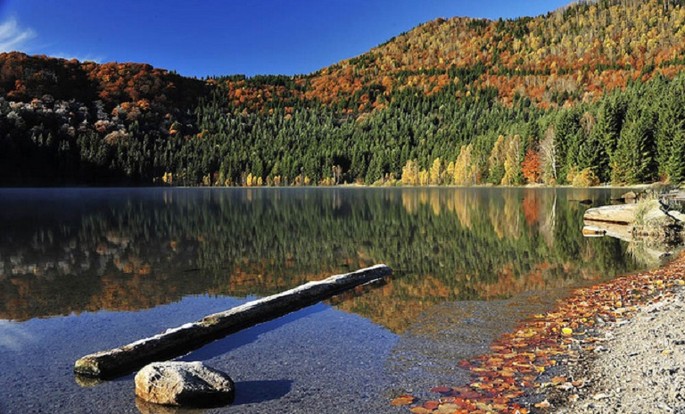 It is situated at the foot of Mount Ciomatu, in the Mohoş Nature Reserve. It covers a surface of 19.3 hectares and has a maximum depth of 6.3 m. The last eruption of the volcano is estimated to have taken place some 35.000 years ago. In the crater that was created, water from precipitations gathered and formed the lake. Lake St Ana is believed to have been formed about 2.700 years ago.

The water is very clear, almost as if it had been distilled, but it is not oxygenated. This is why very few species populate the lake. But the area is negatively ionized, so it has very positive effects on the nervous system. Because of this, a boat ride on the lake can be very relaxing.

People come here to pray at the stone chapel built in the 16th century. But they came here to pray even before that, starting with the 12th century, as there used to be a wooden chapel prior to the stone one. It is said that St Ana helps young people find their match and women bear children.

There are also a few legends that explain the origin of the lake’s name. One of them says that there used to be two rival brothers who were always competing for everything. One of them wanted to prove that he had the most beautiful chaise and so, he tied the most beautiful maidens in the village to it. Because the chaise was too heavy and the maidens couldn’t pull it, the man started to whip them. Ana, who was one of the girls, cursed him for his cruelty and a storm started, which destroyed the man’s castle and killed him. The lake was allegedly created on the spot of the former castle and was named after the maiden.

Another legend says that a girl also named Ana was forced by her parents to marry a man she did not love. She pleaded with them not to make her do it, but they wouldn’t listen, as the suitor was very rich. As a way out of her unhappy marriage, the girl went to the lake on her wedding night and drowned herself in its waters. The locals then named the lake after her, because they were moved by her suffering.