Bârsana - the art of Maramures awarded by UNESCO

The Valley of Iza, the legendary land of the Romanian soul built on faith, love and hope 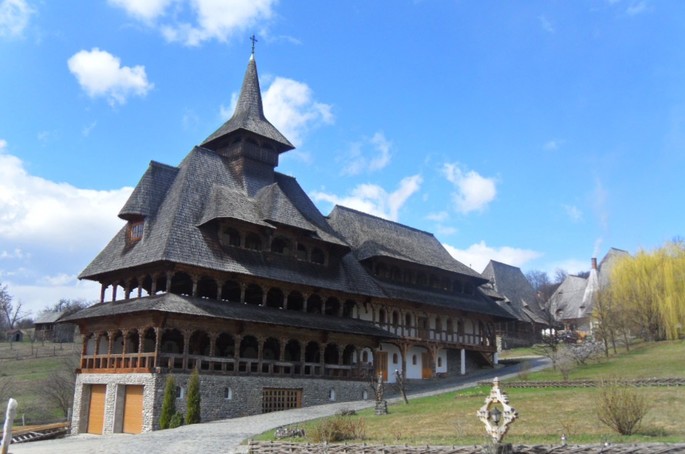 Snaking along the Iza Valley, following the road that narrows more and more, you get on a plateau surrounded by high and green hills that watch over one of the oldest places: Bârsana.

The term "bârsan" indicates a shepherd of long, coarse and curly hair sheeps, a term which in time became a proper name. In fact, most of the villagers are called Bârsan.

The first written evidence for the Christian religious life in this region dates back to the 14th and 15th centuries. They strongly reinforce the proof of continuity on this land for centuries of the monastery but also of the Dacian fortresses found in the area.

The wooden church of Bârsana, situated now on the hill Jbar, was initially built in 1711 on the site where now is placed the monastic complex of the Monastery Bârsana. The church functioned until 1791, when the Austrians have closed it and the monks have taken the route of the monastery of Neamt.

To be protected against the evildoers, the church was moved in 1795 by the will of the priest in the center of the village, on the hill Jbar, in the middle of a cemetery, where it can be found today. The cemetery surrounding the church-monument already existed in the mid-eighteenth century, when the plague devastated the lives of the locals and most of them were buried here without any religious service. Only the presence of the Church brings them peace of the eternal rest.

In 1806 the church was repainted inside by two famous painters of Maramures, Toader Hodor and Ioan Plohod. According to the custom of the time, the paintings were executed directly on the wood in Baroque and Rococo language. The iconographic complex has a moralizing character and includes scenes from the Old Testament and the New Testament, with little interference of the Last Judgment and the Apocalypse. The church also has a valuable collection of wooden icons painted by Toader Hodor.

After the restoration carried out in 1929 and 1965 by the Department of Historical Monuments, the church was declared a historical monument.

In December 1999, the church was declared a UNESCO World Heritage Site along with seven other churches of Maramures. The wooden church of Bârsana is part of the category of typical small churches of Maramures that imposes itself through both its artistic and historical value.

Only a few kilometers away, on the road leading to Strâmtura, is located the monastery that was built on the site where it was before the wooden church.

The Barsana Monastery is a monastic complex founded in 1993 and was built between 1993-1995 on the place called Podurile Mănăstirii with the money and the work of the faithfuls of Bârsana. The monastery complex contains one of the largest wooden churches of Europe; an imposing building, a multi-level villa, with a large flower-filled veranda, and that is one of the most beautiful buildings that can be seen in the monasteries, designed for the abbey, the rooms of the nuns, the kitchen and deposits; the artists' house built on the hill; a home of the craftsmen working in the monastery; a building for the accommodation of pilgrims and people in difficulty. In the years 1998-1999 was built the bell tower with the porch, that makes the entry into the monastery. It is great Booking to get a good hotel and enjoy this place.

The wooden church of the complex was declared a historical monument, and is an important tourist attraction and pilgrimage of Maramures.

Beyond the fairytale landscape in which the monastery is placed, the place connects you to an another geography, much deeper, namely, that of souls.