Morris dancers, a variant of Romanian Căluş present in the UK 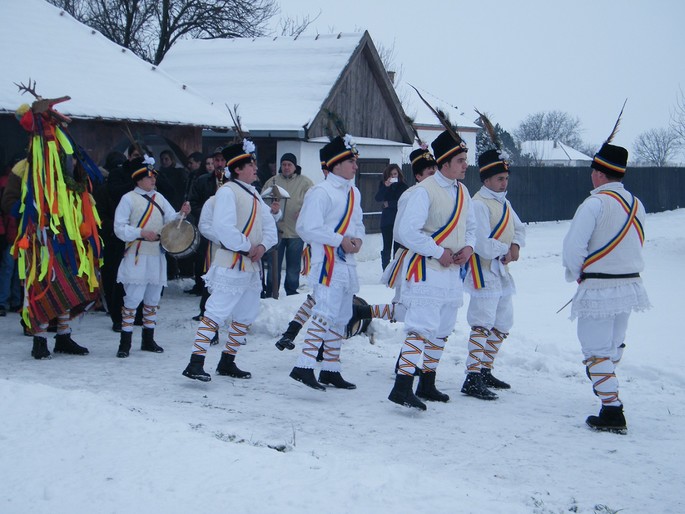 In the beginning, the Căluş was a warrior’s ritual dance exclusively reserved to men who throughout history has preserved the dignity of its halo with all its expressions, passing from the ceremonial rite to a real show.

The connection with the horse is present everywhere in ritual, such as the name, the steps imitating the horse trot and gallop, the "harness" motif on their chests, through which the Căluşari or "the divine herd" is trying to absorb as much as possible, the horse’s excellence traits as the elegance, the power and the virility.

The Căluş ritual takes place in the week before Pentecost and serves to make the transition from spring to summer, during which, according to ancient beliefs, the spirits of the dead are capricious and make their presence felt in various forms. The ritual designate a communication between the worlds where the Căluşari, as emissaries of fairy’s spirits, were meant to banish by the "sticks threat and by raising their head toward the sky, demons or evil spirits prejudicial of health or the bad spirits."

Ielele, the Romanian fairies and mythical beings of the "beyond" world, are related to Neraidele (in Greek belief), or Elf  and Elbe (Germanic people’s faith), Rusal, Nadeljia (in Bulgaria and Russia) Albele (in Macedonia), and so on.

Being invested with supernatural powers they had to protect, to heal and to recover those who were "taken by the Căluş", using their power even against Fairies, if necessary. Callus is a Romanian dance with ritual functions that followed strictly the structure and the organization inherited from their forebears.

So a group of Căluşari knows an exact hierarchy, ie, it consists of: the mute, the foreman, the foreman’s aid, the căluşari and the standard bearer, but also knows a set of rules and prohibitions to be observed, such as the fulfillment of the roles, the chastity during callus, the respect the honor oath and the obedience to the foreman’s will. The mute plays the god role, the role of the highest degree of sacredness because he was the most vulnerable character in front of the Fairies. It’s role and function requires to not say even a word during the 7 days of the ritual, if contrary could be mad or even killed by other căluşari. Căluşarii could exercise their role only between sunrise and sunset.

Callus is a complex ritual that combines and completes several elements such as music, dance, costume, text, objects, representing a value only as a whole. The ritual dance that accompanies the representation has a big contribution in creating a state of ecstasy that facilitates the communication of the Căluşari with the fairies from the "other world".

The Căluş can be found mainly in Oltenia, but also in the southeastern of Transylvania and in Bulgaria. A variant of this ritual can be found in Britain in the Morris-dancers, having a similar choreography and wearing similar costumes.

Beyond the metamorphosis remains a ceremonial dance of a rare choreographically beauty but also an ideal with a complexity crowned by a superlative beauty for the professional dancers. In 2005, the ritual Căluş was proclaimed by UNESCO a "Masterpiece of Intangible Cultural Heritage of Humanity".

Smoked pork shank with beans, one of the most delicious traditional Romanian dishes
Read the latest Traditions