Romania is endowed with a considerable natural capital, consisting of virgin forests, populations of bison, bears, wolves, rare flora and fauna, unique caves and a precious heritage - the authentic traditions of the rural areas 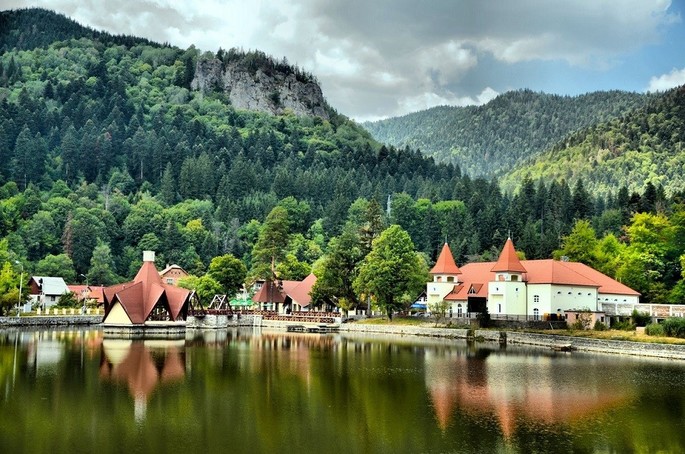 In our country have been developed several areas of ecotourism, which attract tourists from all over the world, recognized for their beauty, but also for their curative aspect of the natural space: Tuşnad Baths, Mărginimea Sibiului, the Land of Haţeg, the Land of Bison, the Hills of Transylvania, Mara-Cosău-Creasta Cocoşului, the Land of Dorne, Zărneşti-Piatra Craiului (mountains) and of course, the Danube Delta.

The Tuşnad Baths - the smallest town in Romania, once considered the "Little Switzerland", is one of the most beautiful spa resorts in the country.

The story of this holiday resort - located in the southern part of Ciuc Depression, at an altitude of 650 m, between Harghita and Bodoc Mountains - begins in 1842, when a Romanian shepherd discovered the beneficial effect of the mineral water present here.

In 1852, the Austrian Emperor Franz Joseph falls in love with these places and gives the disposal to build several typical Swiss villas and the area became known as the "Little Switzerland". The air rich in negative ions breathed on the "cure paths" in the forest and the treatments with mineral water help and maintain our body perfect healthy. The wonderful natural surroundings strengthen and enrich the curative effect of the treatments.

The sky reflected in the Cucaş Lake surrounded by green forests and mountains and the small beautifully landscape buildings make up a particularly picturesque setting. Near the resort there are a multitude of attractions that you can visit:  Saint Ana Lake (a volcanic lake, unique in the Central and Eastern Europe), Tinovul Mohoş (a natural reserve with rare plants species), the Miko Fortress and the Ethnographic Museum from Miercurea Ciuc, the Red Lake (the largest dam lake from the country), he Olt Defile (a natural splendor), the Falcons Stone, the Cârţa Fortress (a rustic fortified fortress), the Medieval Fortress Odorhei. To all this, are add the mountain paths through the thickets of the forests, where you can breathe the fresh and clean air and you can commune with nature.