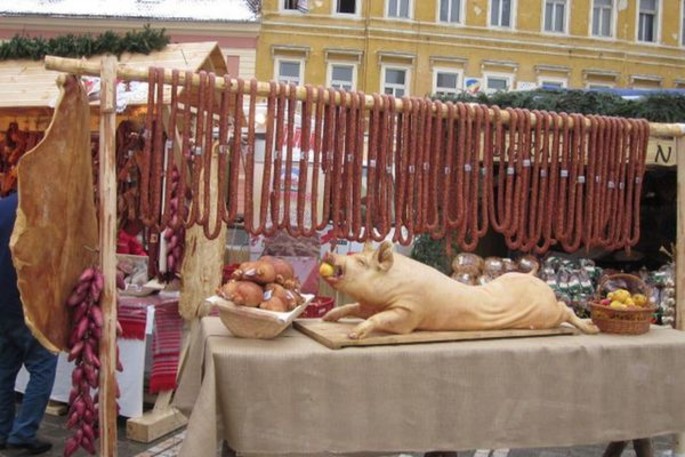 Before the big Christmas holiday there is another great moment to celebrate, namely St. Ignatius. Even if it’s not part of the ceremonial complex of the 12-day holidays of the Christmas period, in his absence Christmas is unimaginable. Now it is sacrificed the pig from which will be prepared the food for the holidays. So, to the pig was "dedicated" a celebration - the Ignatius, the slaughter of the pig, the Ignatius of the pig, etc. As a result, now in campaign the pigs are sacrificed. There are, however, areas in which the sacrifice of the pig takes place on the eve or on Christmas Day, for the ban of the Advent.

In any case, there is a "requirement" almost ritual of sacrificing an animal. But if you're so poor and you do not have a pig to sacrifice, you have to sacrifice something (though, in no way a hen, because it "scratches" the luck of man during the coming year).

The reason of the sacrifice is ancient and deeply rooted in the archaic mentality: "In the mentality of archaic societies there is a strong link between the blood and the fertilizer force, between blood and rain. The provocation of the blood through the wounds, fights, and fights like magical practice to bring the rain are found in many countries. (...) In the day of St. Igantius, also called Inătoarea (on December 20), is practiced not only the sacrifice of the pig. With the blood of the slaughtered pig on the day of Ignatius people spread blood on their face, and those who had not a pig they have to cause a hemorrhage."

It would be very difficult to explain, if not trough ancestral reminiscences, the habit of the bloody slaughter of the national emblematic animal in the Christmas Eve. In fact, if all the other animals have some connection, whether with the birth of Jesus, or with God's creation, the pig is considered by Christianity as one among the most "impure" and evil animals.

However, the Church appropriated this sequence so strong that, in rural areas, after the sacrifice and "treatment" of the pig follows a very solemn moment: it is made a cross to the pig with a knife (which is sprinkled with salt, that meat will be not damaged), people use to say: "God bless us"!, "Eat it healthy", "See you next year, etc.", after which the landlord serves brandy plums to everybody. In some places in Transylvania, nowadays, this moment i celebrated by the parish priest who blesses the family and their home, saying a little prayer.

From the various specific dishes we will mention the "sângerete" or the "borândău" (that is a variety of blood sausage), which is the most appropriate expression of the bloody sacrifice take place on Ignatius. The food is prepared from the blood of a slaughtered pig, collected in a bowl, with salt, and then the onion is fried in the fat where was boiled the caltaboşi and toba.

Everything is mixes well and served hot with polenta.