In the Romanian tradition, Christmas is a time when you sing Christmas songs, which in Romanian are called "Colinde". In areas where traditions are still preserved, groups of men walking on the streets and sing Christmas carols in all the houses of their locations. This typical Romanian custom is part of UNESCO World Heritage 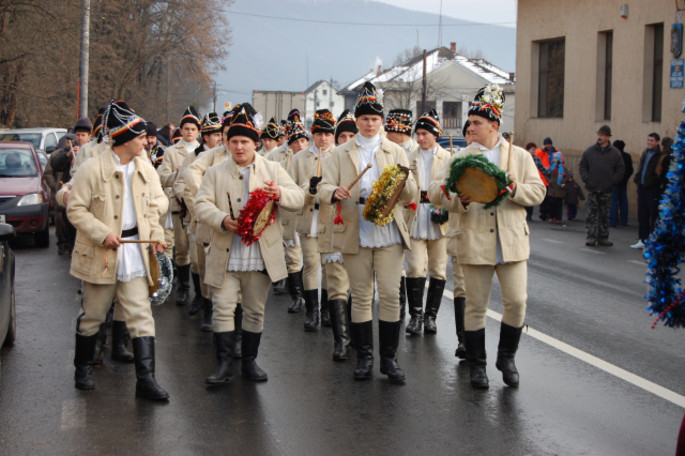 On the valley of the Mures river there are famous groups of young boys walking on the roads of the villages playing drums to announce the birth of Jesus Christ. This show begins from December 24 and ends a day later. In each house, the young boys have to ask owners if they are willing to listen to their songs and the message of Jesus' birth. When the answer is yes, they begin to sing carols, wishing all the best to their family and receiving homemade sausages, sweets and grappa.

Săvârşin, a town in the district of Arad, and is famous for two things: the castle of the Romanian royal family and the group of young people which every year, on Christmas, go from house to house and sing Christmas carols. Only unmarried boys are accepted into the group of carols singers. They follow an ancient ritual in their show: first, they sing in the church of the town, then to the local institutions and the royal castle. Only after they sad the wishes in these places, young people begin to visit the houses of the inhabitants. The singers have hand-woven clothes, and some mask, especially one that depicts the goat, typical for their region.

The repertoire of the group of Săvârşincontains traditional songs that create the optimal environment of Christmas holiday. The lyrics do not follow exactly the religious themes, but may have a symbolic character, for young people who want to be lucky in the future marriage or for hunting.Young people say that the best part of this tradition is that they sow hope and optimism in every home, while for the tourists coming from the big cities is a unique opportunity to discover the ancient traditions and listen to the rhythms of the drums.