Traian Vuia effected "the first take-off without any assistance carried out successfully by an aircraft equipped with a modern landing gear equipped with wheels, even if he flew only for 12 meters. Moreover, it was the first monoplane that have ever flown" 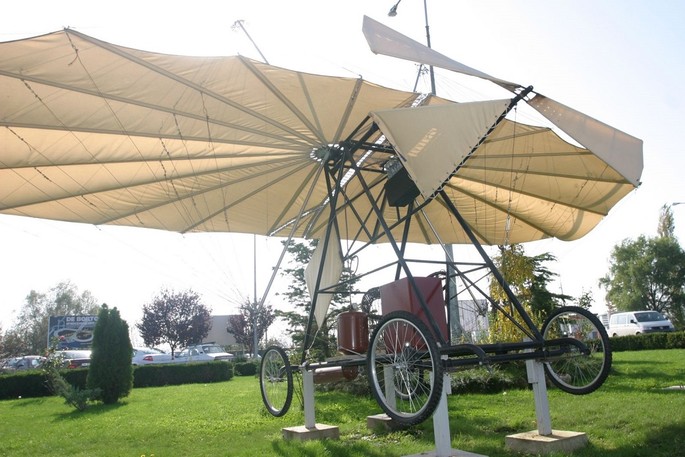 Traian Vuia was born on 17 August 1872 at Surducu Mic, in the Timiş County. Since childhood he manifested a strong inclination towards physics and huge passion for aeronautics. Beginning with the childhood kites, which he studied and tried to improve them to increase their flight performance.

Although he earned a doctorate in law, he choose to pursue his dream of “flying” and left for Paris in 1902 to implement his projects. On leaving, he addressed to his mother the following words: “I'm going to Paris, but let it be Mom, do not be sorry, because I'll come from there in flight or I won't come home again”.

His project the “automobile-airplane” is viewed with skepticism by the Parisian Academy of Sciences, because it is considered illusory the opportunity to fly by a heavier-than-air machine. However he was not discouraged and got the patent for his invention in 1903. He built alone this device based on his knowledge of mechanics and thermodynamics. He radically modified a Serpollet motor  and made it work with carbonic acid.

The device looking like a “bat”  with the folding wings like an umbrella, is called "Vuia I". It will fly on 18 March 1906 at Montesson. After 50 meters running at ground, it took off alone, about 1 metre height and flew a distance of 12 meters. The flight was interrupted because the propeller stopped. Although it lasted a short time, the flight was considered a success. Traian Vuia opens the path to the modern aeronautics. His indisputable merit is that it was the first successful flight by self-propelling, of a machine heavier than air .

He goes further, seeking to improve his project. Thus, in 1907, the airplane “Vuia II” with an Antoinette engine type flew a distance of  70 metres at a variable height. Thereafter, Traian Vuia extends his aeronautics research but also in other zones of mechanics .

He has conceived and conducted two helicopters and at a conference in 1923 he announced that : “a new flying machine” was already built, but it needs some improvement. M.Yvonneau, who worked with him at that time, would reveal only in 1957, during the Exhibition “Traian Vuia” in Bucharest, which were the ideas that animated the inventor : “Vuia projected  a four-rotor machine in tandem, equipped with a cab for 100 passengers. Unfortunately, the idea remained suspended”.

In 1925 he made an “original steam generator” and in the First World War period, along with Victor Tatin, built a “torpedo” that was successfully used by the French Navy.

In 1950 he returned to the country, seriously ill. On September 3, he died in Bucharest. He was buried in the Bellu Cemetery.