The medieval and modern undergrounds of Bucharest- between legend and truth

The first writings about the tunnels and the catacombs of Bucharest, appeared in 1899, in the work "History of Bucharest" , wrote by a Romanian historic, Gheorghe Ionescu-Gion. 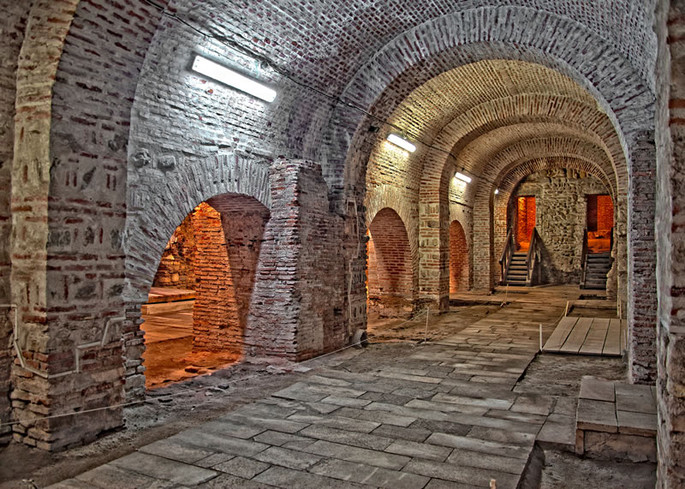 Cellar in the Old Court, Bucharest

The first underground cellars were built by the wine merchants at the beginning of the XV-th century, in order to storing wine barrels. In time, the cellars were extended and between them have created the crossing tunnels, for the carts drawn by oxen that have transporting the wine barrels.

During the Phanariot rule (1711-1821), because of the uncertainty, many noblemen and rulers built their mansions, provided with output horses secret under the ground. There are many legends, tales and truths about Bucharest's underground gangways.

About the ruler Vodă Caragea (1812-1818), it is said that "he goes with the calash  under the ground, at the Cotroceni Palace, until the Court of Spirii Hill". Some bridges underground were made at the behest of the ruler Vlad Ţepeş (Vlad the Impaler) (1456-1462), during consolidation of the Royal Palace (Old Court today) in 1458. It seems that much of the Old Town basement is filled with deep  and vaulted cellars but also communication tunnels, which are extended to other areas of the city.

Following the restoration of the streets in the Old Town, in Lipscani street, were discovered cellars vaulted and reinforced with thick walls of burnt brick. These are the cellars of the Serban Voda Inn, built between 1683-1685, where is built later the National Bank of Romania. Back when the Unirii Boulevard was built, a tunnel was discovered in the street Negru Voda, more than two meters high, lined with burnt brick.

Dan Falcan, historic of the History Museum of Bucharest, confirmed the existence of a system of old caves and tunnels, from the XV-th century. He argues that "the old underground maze seems be less semnificative in comparison to the those built at Ceausescu's order." He says that has confirmation from the soldiers who entered in the underground of the past Central Committee, on December 25, 1989. Here,  it open more routes of tunnels, leading to the Intercontinental and forming the contact with tunnels from the  technical area of the subway, and which operate in parallel.

In these tunnels can travel with the electric transport. It is said to exist at a lower level with "underground rivers"  where can travel with the boat. And the People's House was provided with  at least eight tunnels and two bunkers recognized, but it is said that there are more secrets. The Ceausescu's architect, has confirmed its plan to build an underground emergency system, where it can be travel by an electrical system, car or boat.

Cellar in the Old Court, Bucharest