Romanian Athenaeum: an universal heritage and an architectural jewel in the heart of Bucharest

Romanian Athenaeum is a Romanian symbol of art, culture and spirituality. Work of the French architect Albert Galleron, built in the late 19th century, the building impress by the architectural style, but also by the interior paintings 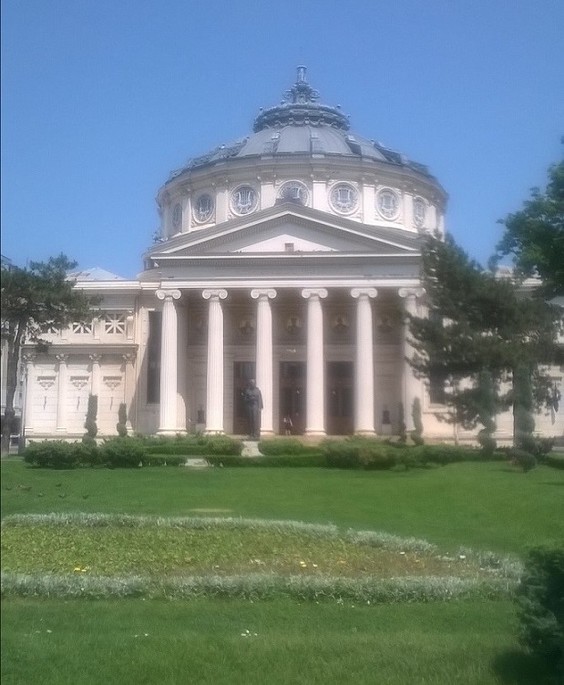 Constantin Esarcu, founding member of the Romanian Athenaeum Cultural Society was the initiator of the construction of a building of sciences, arts and culture. He is also the one who initiated the campaign for collecting funds through a public subscription, launching the famous slogan: "Donate one Leu for the Atheneu!" ("Daţi un Leu pentru Ateneu!").

In 1886, is placed the first stone of the building foundations of what will become the Romanian Athenaeum. The fact is that on the place chosen for the construction, already existed the foundations for the construction of a circus. The architect had thus to adapt the project to the pre-existing circular shape, a novelty and unique thing in the architectural space of that time. On 14 February 1888, the building was inaugurated with a lecture by Alexandru Odobescu, and in 1989 a philharmonic orchestra conducted by Eduard Wachman held here the first concert.

The name, which comes from the goddess Athens and the appearance of an ancient Greek temple, increase the cultural and spiritual load of the edifice. The triangular fronton at entry is supported by 6 ionic columns and on the frontispiece are seated five medallions in mosaic, depicting five figures of great Romanian rulers: Alexandru cel Bun, Neagoe Basarab, Vasile Lupu, Matei Basarab şi King Carol I. The majestic entrance hall encloses 12 columns made from Carrara marble, which support the concert hall.  Four monumental stairs in spiral, and the stairs of honor, lead the public to the concert hall. In the center of first level, on the stairs of honor, dominates the bust of the great Romanian composer George Enescu.

The almost 1000 seats are arranged in a Greeks-Roman amphitheatres form, having perfect visibility from anywhere. The huge dome, richly decorated, absorbs the vocal and instrumental background and redistributes it by reverberation to the auditorium. The excellent acoustics of the resonant cavity places the concert hall as one of the best buildings of its kind, not only in Europe, but also in the whole world.

Under the dome, around the room, unfolds before your eyes the largest mural fresco with historical themes from Romania, painted by Costin Petrescu. There are 25 representative historical scenes, from the "conquest of Dacia by Emperor Traian", up to royal period, under kings Carol I and Ferdinand. As a matter of spiritual interest, it must be said that the scene of "the entrance of Mihai Viteazu (Michael the Brave) in Alba Iulia", was painted by the man who would become the great confessor Arsenie Boca, named of believers "the Holy from Transylvania". At that time, his name was Zian and he was the student of the painter Costin Petrescu .