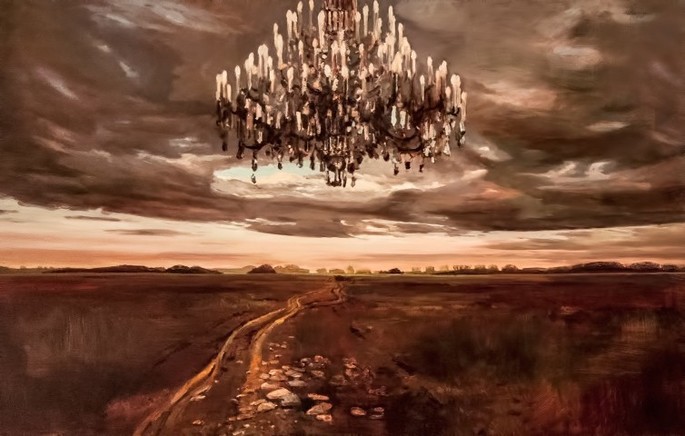 A discrete figure, that always puts his art before his person, Gheorghe Fikl has impressed collectors, critics and art enthusiasts around the world. He studied painting at the West University in Timișoara and has had exhibitions at Solo Show Slag Gallery, New York, Schortgen Gallery in Luxemburg and many other places around the world.

Art has always featured heavily in his life, as his great-grandfather, who studied in Vienna, was an art enthusiast and his grandfather was also a painter and left behind a few notable works. There is no question, however, that the artistic aspirations of this family have been completely fulfilled in the work of Gheorghe Fikl.

His paintings will either amaze or shock you, but they will definitely not leave you indifferent. Fikl confesses that he means his art to be declarative and not decorative and he accepts that risk that his art might be too outrageous to hang up on a living room wall.

Art critic, Chen Tamir, describes Fikl’s paintings as being very balanced and always featuring a mythological animal of sorts. The central figure is illuminated from a single source overhead, but the light fades before hitting the floor. Tamir considers this to be reminiscent of theatre plays, which rely on dramatic lighting.

An important theme in his work is the altar, which explains the abundance of animals that used to be sacrificed and his very visceral chunk of meat series. One painting called “Shrine” depicts two priests officiating a religious service, two chunks of meat hanging from the ceiling and a herd of sheep leaving the room.

At other times, his paintings use Baroque elements, suggesting the attempt to capture the grandeur and sublime of a bygone architectural style.

Prince Charles of Wales learned about the Romanian painter from Archduke Andreas von Habsburg-Lothringen, who saw Fikl’s works in an exhibition. The archduke furnished Prince Charles with a catalogue of the painter’s works and he took an interest in them as well.

The Prince acquired the painting called “White Cadillac, Peacock Gold Curtain“, which is also on the cover of the novel “The Rich” by John Kampfner.

Spartan - the 4th in the classification of chains having the most restaurants on the territory of Romania, as well as a major competitor of the strong international franchises, such as KFC, McDonald’s or Subway

The Nora Restaurant – one of the most popular restaurants in Timisoara with Romanian, Serbian and international specifics

The Brewers Court Timișoreana - the perfect atmosphere to enjoy Timisoreana beer, slightly fruity and full of freshness, which conquers you with its authenticity
Read the latest Events