The goose meat is rich in iron, zinc, phosphor and potassium with multiple benefits on the body 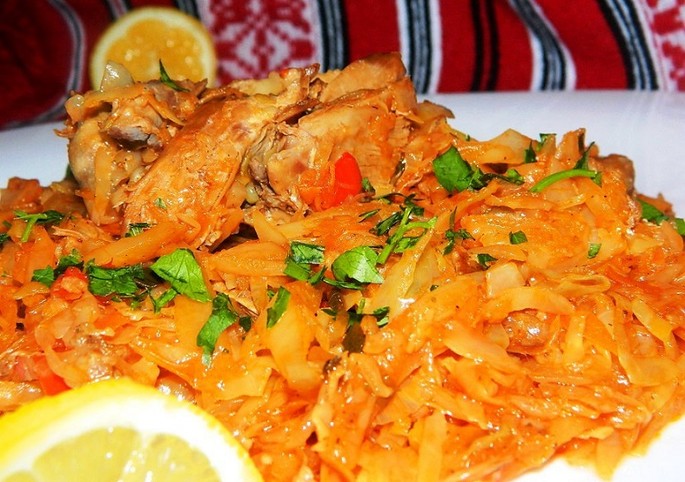 This recipe reminds me of childhood. When my grandmother slaughtered a goose, after its cleaning of feathers, she fried the goose on flames. Then, she sectioned it and removed all the fat which was then melted in a pan. The resulted grease was put into jars in a cool place and was later used for soups. The resulted greaves were delicious and were eaten with warm bread and onion.

The goose steak made by my grandmother in the oven was complemented with braised cabbage or with a salad of sauerkraut.

For the stuffing: onion (2 onions cut in small pieces, cabbage (1 medium cabbage that is cut for braising), 2 sliced apples. Add: 3 tablespoons of ginger, 1 teaspoon of cinnamon, cloves, bay leaves and 5 tablespoons of honey.

Preparation: The goose is washed and dried with a paper towel.

The fat is removed which will be later melted. The goose is prickled with a knife so that during cooking the fat comes out and drips in the tray. Then, season with salt, paprika (sweet and hot), turmeric and dried thyme.

The fat is melted in a pan and then the cut onion is added for frying. After the onion softens, add the cut cabbage and a bit of water for braising at small flame in a covered recipient, stirring from time to time.

After the cabbage softens, add the apples, ginger, cinnamon, cloves and bay leaves. Add the honey and stir well. Cook for 2 more minutes.

The goose is put in a roasting pan with its breast upwards. Fill the goose with all the resulted stuffing and tie the legs for the stuffing not to come out. Add water around the stuffed goose as well as thyme branches, peppercorn and bay leaves.

The roasting pan is put in the hot over for 15-20 minutes at a high temperature. The fat drips into the pan. After which, decrease the fire. Roasting is done in 3-4 hours. From time to time, with a large spoon, take out some of the fat from the pan and pour it on the bird.

A delicacy that is worth your while!

Balmoș with eggs and homemade sausages – a reinterpreted traditional recipe

Sour soup of Radauti County, one of the most tasteful traditional plates of Romania
Read the latest Local products