Magic of Rain and Heat in the Romanian traditions 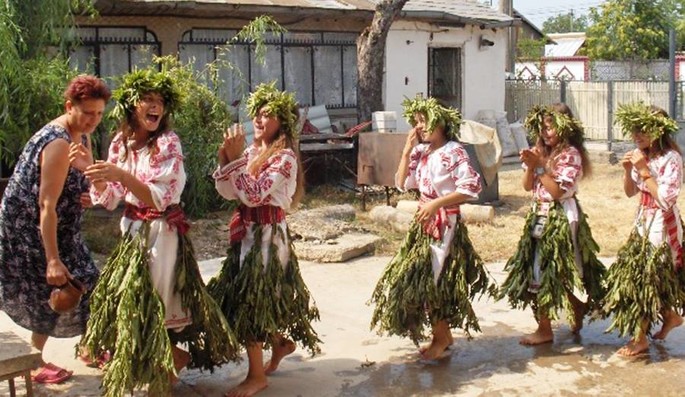 Apparently Caloianul is the same as the Paparude. Both customs are about the invocation of rain, during moments of dryness. But if Paparude are children (girls) “dressed” in green for bringing the rains in times of great dryness, Caloianul (Scaloianul, Mother of Rain, Father of Sun) are rituals performed during dry periods, but also in periods of heavy rains. Therefore it is a fertility ritual, referring directly and explicitly to death and resurrection of the vegetation (supreme) God.

The essential elements of the ritual are relatively similar in the entire country and consist in manufacturing of a human-like puppet, it’s decoration with red egg shells (usually it is performed after Eastern, the Eastern eggs being inherently considered sacred, the burial, the give-away, the disinterment after three days – the Christian myth is obvious here) and the cast away of the puppet into a fountain or into a stream water where, obviously, it will “come to life”. Also the reference to Eastern by the egg shells is referring both to the Great Holyday of the spring that long time ago was marking the end of the year and the beginning of the new year of the agricultural people, but also to the old pre-Christian Gods of vegetation that died at the end of the cycle in order to come to life again next year.

As we said before, the custom has two sides. In case of heavy rains threatening to produce heavy damages or even to destroy the cultures, it is called Mother of Rains. In case of prolonged dryness, running the risk of burning the fields, it is called Father of Sun.

Interesting is also the fact that the burial of Caloianul has all the specific elements of the traditional burial, being followed by the give-away. The girls meet in a house they bring food and have a party. During the ritual’s moments, the following words are said: “the father of the Sun has died and the Mother of the Rain has come to life”.

It is meet and proper to also say that Caloianul is most frequently buried at a crossroad, where important ways are meeting or even at a border, being the symbol of the border between the two worlds, This World and the Other World, which forces are usually invoked to fulfill the performed magic.

The character is not completely “clean” either, the same as everything even a little bit related to magic, be it positive or negative. As about Caloianul, it is believed that it is an unhappy spirit, a soul that hasn’t found its peace as it hasn’t been buried as a Christian, or because of other unknown reasons. Only they, the souls that can’t find their tranquility and peace, can help people on this world to invoke rain, to stop it or to start it.