Somewhere downtown the Capital, near the Gradina Icoanei, there is a small spiritual dwelling of a special beauty, a small paradise hidden from the eyes of the people 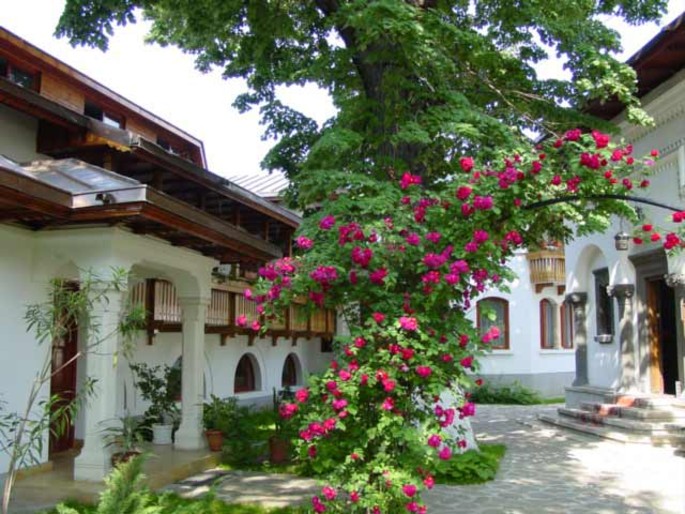 The Darvari hermitage begins its story in 1834, during the reign of Alexandru Ghica-Voievod, when the spouses Mihail and Elena Darvari (from the Buzeşti family) bought a plot of land from the founders of the nearby Church of the Icon. Here, a small church without a tower will be built, which will be dedicated to “St. Emperors Constantine and Helen”. A year later, in 1835, the first monastic community of nuns settled in this place.

However, in 1865, the nuns were forced to leave the hermitage, as a result of the Law of Secularization adopted by Prince Alexandru Ioan-Cuza. Since 1869, the settlement changed into a hermitage of monks as the Romanian monks from the Prodromul Hermitage on Mount Athos, passing through Bucharest, received the consent of the Darvari family to take shelter in the abandoned hermitage. Between 1933 and 1934, Mihai Darvari (Mihail Darvari's nephew) has the church rebuilt and the cells renewed.

The cross-shaped church is built of brick, in Romanian (Oltenian-Wallachian) architectural style. It is a small church, but very beautiful and well maintained. The splendid fresco painting, the work of the painter Keber made in 1934, was restored in 1967.

The chapel, beautifully decorated, has a splendid miniature carved iconostasis. To the north of the church is a building that houses the cells, and to the south is another building that includes the abbot and the refectory.

The courtyard, with paved alleys and sidewalks, is surrounded by a high whitewashed brick wall. On the edge of the alley at the entrance there is a secular linden tree and to its right is a fountain used for irrigating the park, but also for drinking water.

Pilgrims and tourists in Bucharest, if you want to get out of the hustle and bustle of the city and enter another world, if you want to relax physically and mentally, if you want to recharge your soul and spirit, do not hesitate to stop at the Darvari Hermitage. A monastery in the heart of the city, but which takes you out of the tumultuous world and carries you on the smooth wings of peace, tranquillity and serenity.