The tourists that arrive in Bucovina are invited to enjoy one of the most tasteful traditional plates from Romania, the sour soup of Radauti. 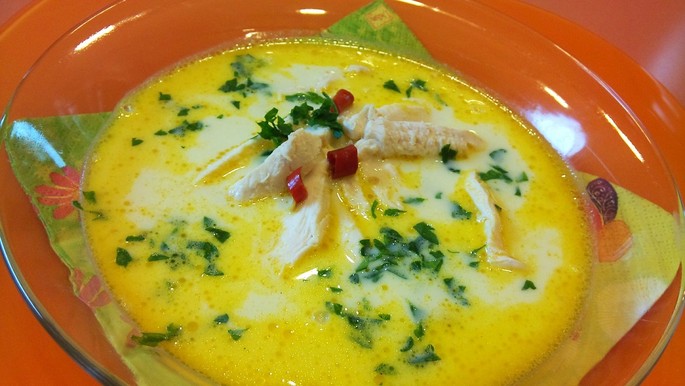 Tasteful, consistent and light   - these are the words to describe the sour soup of Radauti.  It is very much like the Tripe Soup, but it is less greasy and has a sweeter taste.

The person that has revived this traditional recipe is Mrs. Cornelia Dumitrescu, an expert in gastronomic art at the “Nordic” Restaurant from the town of Bucovina. Mrs. Dumitrescu relates that the idea to invent the sour soup of Radauti has arisen in order to offer an alternative to the Tripe Soup.

The first version of the Radauti sour soup had turkey, but later it has been replaced with chicken because it is easier to prepare.

Nowadays the Radauti sour soup is prepared by the housewives of all the regions of our country. Moreover, after the tourists have enjoyed in Romania such a sour soup and have been charmed by its wonderful taste, this traditional Romanian plate has become known in other countries from this continent.

How to prepare the Radauti sour soup: The chicken breast is boiled in three liters of water, with little salt and all vegetables that have been previously cut. The foam is gathered and when the meat is boiled, the vegetables and the chicken breast shall be taken out. The meat is cut in long slices that are boiled again but without the vegetables. The slices are boiled for a short time, the soup is made sour adding vinegar and adding the mixture formed of yolks, flour and cream, but not before mixing it with five spoons of hot soup.

In the end the garlic cloves cut in small pieces shall be added.  It shall boil for another ten minutes, add salt and pepper to taste.

Ideally the Radauti sour soup shall be served hot, with toast and hot pepper.