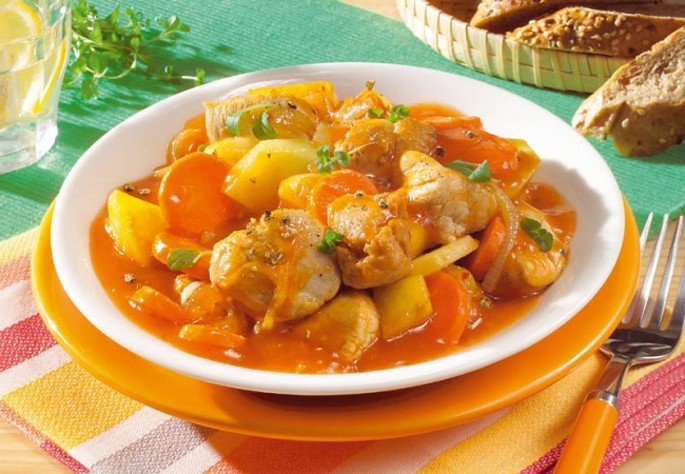 The recipe dates back to the Middle Ages and was invented in Hungary. Its name comes from the Hungarian word “gulyás”, which means cattle herder. These humble people were the ones who came up with this nourishing and easy to make that was declared a „traditional Hungarian meal” by King Josef II in the 18th century.

It is a thick soup made with beef, onions, peppers, paprika, bay leaves, white wine and vinegar that acquires a delicious taste if cooked in a cauldron over a big fire.

To cook it, what you need to do is to first wash the meat, cut it into small pieces and sprinkle it with pepper. Then, peel the onions and garlic and chop them into small pieces. Heat the butter and when it is hot, you can add the meat. You fry the pieces on all sides until they become slightly brown. Next, add the onions and garlic and let them cook with the meat. Now you can add the paprika, salt, bay leaves, vinegar, tomatoes, and 700 ml of water. You should let everything simmer for about an hour and a half.

While everything is cooking and the flavors are mixing, you can prepare the rest of the ingredients to add at the end. The peppers should be washed and cut into strips of about 1 cm and their seeds, removed. Next, the potatoes should be peeled, washed and then cut into 2 cm pieces.

The peppers should be added to the pot after the stew has boiled for one hour and the potatoes, 15 minutes before taking the food off the fire. As a final touch, you mix the flour with some water and incorporate it in the stew. And finally, add the sour cream.

And everything is done! You can now enjoy this lovely dish with some dry red wine.