Amandina has been very popular in Romanian confectioneries since the 1960s. They have a specific taste of caramel, cocoa and rum that we have grown to love 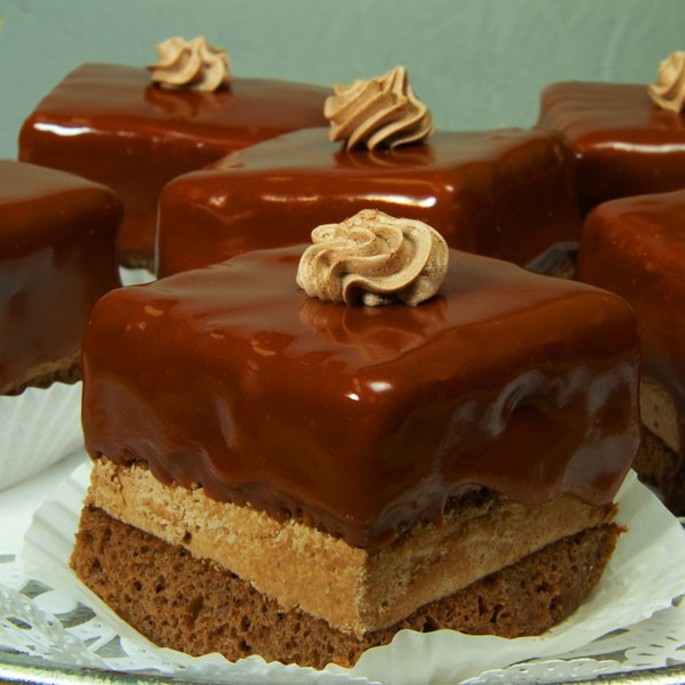 Sadly, few confectioneries still respect the original recipe. They cut down on the sugar, increase the quantity of syrup and replace the butter with margarine, which is a huge compromise on the taste. But in the following, we will give you the original recipe.

The cake has four components, which have to be cooked separately: the dough, the cocoa cream, the moistening syrup and the cocoa fondant icing.

You begin by making the caramelized sugar syrup, which goes into the dough. Don’t forget to save one tablespoon for the icing!

Then, you separate the yolks from the whites and put them into two large bowls. Put 115 g of sugar over the yolks and the other 55 g over the whites. Mix the yolks with the sugar and then add 60 g of cold water and the syrup. Mix everything and add about 75 g of flour. (This is where you can put the cocoa in if you want.) The whites should be whisked and then added to the yolks. Afterwards, the rest of the flour should be added as well as the oil. Mix the composition gently so it stays fluffy. Bake the dough at 180°C for 30 to 40 minutes and when it is cool, cut it into three slices.

Now, for the moistening syrup, you need 300 g of granulated sugar, 250 g of water, the zest of one lemon and 30 g of rum essence. You boil the water with the sugar for 10 minutes and then add the lemon zest. When it is cool, put the rum essence as well.

For the cocoa cream, you will need 250 g of fondant, 250 g of butter (80% fat), 50 g of melted butter, 30 g of cocoa, one teabag of vanilla sugar and a few drops of rum essence. You start by melting the fondant in a pot and then letting it cool. In a different pot, melt the 50 g of butter and sprinkle the cocoa over it while still hot. When it has cooled, add the rum essence and the vanilla sugar. The other 250 g of butter should be mixed until soft and the cooled fondant incorporated gradually in it.

And, for the final touch: the cocoa fondant icing. You melt 350 g of fondant and sift 15 g of cocoa over it while it is hot. Mix the cream over the heat and if it gets too thick, add a little water. Finally, put the tablespoon of syrup that you saved earlier and the icing is ready to be poured over the 20 pieces of cake!