The ”burduf cheese” or the „bellows cheese” - the pride of the mountain sheepfolds, the queen of the Romanian cheeses 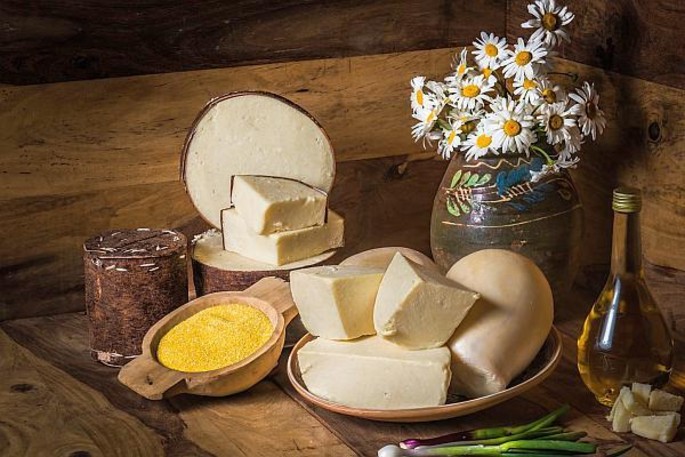 The Romanian cheese is becoming increasingly known in the world, winning several medals at international fairs. The Romanian factories exports 50% of their production to Europe. The most appreciated are the specialties from goat and sheep milk, the hard cheese and the “telemea” from sheep's milk and, not least, the ”burduf cheese” or the „bellows cheese”.

Known in some regions as the „kneaded cheese”, the burduf cheese is one of the oldest Romanian traditional products, especially for the mountain areas in southern Transylvania. Even today it is prepared according to hundreds-years-old recipes, passed down from generation to generation and enshrined by families of shepherds, who carry on the tradition.

Method of preparation: the fresh milk is poured into a vessel of wood and natural lamb curd is added in order to coagulate the milk. After the milk coagulated, it is placed in special sieves of circular form and allowed to drain until there is no drop of whey. The cheese thus obtained (called caș), is stored in wooden barrel and left in the dark for several days, for leavening.

The fermented cheese is crumbled  (with the grinder), is salted, is well kneaded and then is introduced, depending on the case, in a sheep’s bellows, a pig bladder, or other materials, made so as not to allow air to enter.

The most famous area where you can find this cheese is specialty Mărginimea Sibiului, where is produced the famous “Cheese of Sibiu” but also the delicious "Burduf cheese in fir bark", which is prepared by a different method: a spicy paste is prepared from the caș that is introduced into cylinders of fir bark (or spruce), they are closed hermetically with a cover of the same material and they are left to ferment for a few months. In this way, the cheese acquires a special flavour, thanks to the fir bark. The cheese can be kept like this for a long time without alteration changes.

The "bellows cheese" is usually associated with the hot polenta, the famous “bulz” roasted in the ashes being a traditionally delicacy, which comes also from the sheepfolds. Some old recipes secrets are kept by shepherds’ families who carry on the tradition, which is why, the cheeses made by them differ from the others in tastes and flavours.

It’s very important also the type of milk used. The milk from the mountain folds - where the sheep eat the ecological grass without pesticides and pollution - it is certainly much better, more delicious and more aromatic.