If you happen to be a guest in a house of Romanians, you will definitely be offered coffee. Often a reason for friendly talks and meetings, Romanian coffee is actually brewed Turkish style... 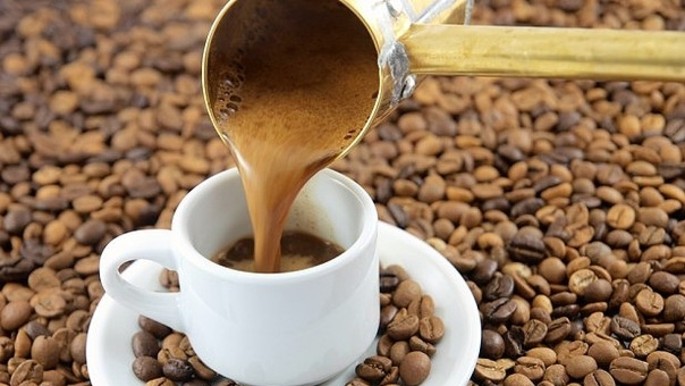 Even if in modern restaurants coffee may be found in all styles, from the Italian espresso to Turkish coffee with kaymak (coffee cream), in Romanian culture, this brewed drink has a special place. First of all, coffee is a way of entertaining guests. Therefore, one of the questions you are often asked when being a guest in a Romanian house is: A cup of coffee? Brewed coffee is part of every Romanian's daily routine. Especially in the morning, Romanians often drink coffee with their neighbors or their friends, a reason for which this moment is protracted by long conversations.

When in Romanian restaurants, foreigners too usually order Turkish coffee, just like Romanians drink it. A recipe tells us that two teaspoons of ground coffee and 1 teaspoon of sugar are added to a cup of 100 ml of water. All these ingredients are then brought to a boil over low heat, and, when it starts to boil, the kaymak is spooned off and put in the cup. The coffee pot is then left to simmer a bit more and one more teaspoon of coffee is added. Then it's put aside for the coffee granules settle and for the coffee to release all its flavor. It is then poured in the cup and drank together with family and friends.

Please note how important the kaymak is... The word comes from Turkish and it is the tastiest part of coffee... Its cream! Its quality depends on the coffee quality and also on its producer. And, if it is well prepared, the kaymak enhances the pleasure of coffee tasting. This kind of coffee must not be mistaken for the filter coffee of the Western world. The kaymak gives it a special taste, at a special time, coffee time, not to mention that in the past, there was the consuetude to also offer preserves or sherbet, especially in the families of the high-society.

In the communist '80's, there was a coffee crisis in Romania. The famous nechezol (surrogate coffee), with no kaymak taste and no natural coffee flavor, was then invented. This was the name the Romanians gave to a kind of coffee made of surrogates, mainly chickpea and oats. Two kinds of coffee were created then: one with kaymak, that is one that had an extra something, and another one without kaymak, that is missing something.

Romanians drink coffee nowadays in all styles, but the Turkish one is deemed to be a tradition in the Romanian coffee drinking culture. It is said that the oldest Turkish coffee recipes come from the Turkish people who once lived on the Ada-Kaleh Island, who used to boil coffee in the sand.