Situated at 30 Union Square, Banffy Palace is a pearl among the buildings in the city, containing essential elements of the Transylvanian Baroque 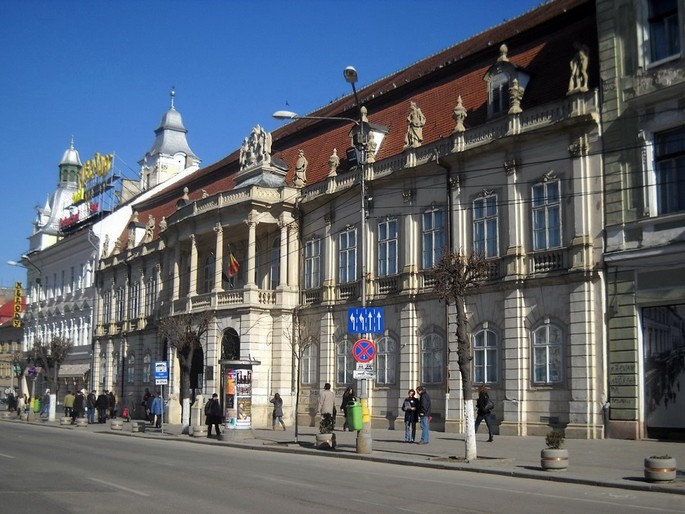 Banffy Palace is one of the most beautiful and imposing buildings in Cluj-Napoca and one of the most important Baroque edifices in Transylvania. It was owned by the Banffy family and was built at the request of Gyorgy Banffy to match his status and wealth.

Count Gyorgy Banffy returned to Cluj-Napoca after finishing his studies in Vienna. He already owned a house in the center of the citadel, but wanted to build a palace that would amaze everyone, and as such he bought three other houses that were close to his own. He then commissioned German architect Johann Eberhard Blaumann to implement his plan. Constructions commenced in 1774 but were stalled just one year later due to financial difficulties. The work was completed in the year 1786, just in time for the appointment of the count as Governor of Transylvania.

The palace is shaped like a quadrilateral – 67 meters in length and 48 meters in width – and has a patio, a floor and numerous rooms. The ground floor was occupied by the servants, the kitchen and various storages, while the first floor was reserved for the Banffys and their guests. Historians say that the family organized many balls in this residence and especially in the patio.

Other noblemen of the period described the sumptuous furniture and decorations that the palace contained. According to Josika Miklos, the walls were covered with rugs made of red Transylvanian damask, while the rooms were furnished with heavy furniture and Venetian mirrors.

Many famous people were lodged here when visiting Cluj-Napoca. Austrian Emperor Francis I and his wife, Carolina, watched a military parade in Union Square from the balcony of the palace. Another famous couple that stayed here were Austro-Hungarian Emperor Franz Josef and Empress Sisi. Composer Franz Liszt also held a series of concerts in the rooms of the edifice.

The building was nationalized in 1948 and in 1956 it became the headquarters of the Art Museum of Cluj-Napoca. After the year 2000, it was reclaimed by the descendants of a former Romanian housekeeper that used to work for the last Banffy descendant, but the lawsuit is still ongoing.

Banffy Palace in the past - Cluj Napoca