Nobody made better doughnuts that my grandmother - all fluffy and tasteful, filled with plum jam or confiture, or even without filling 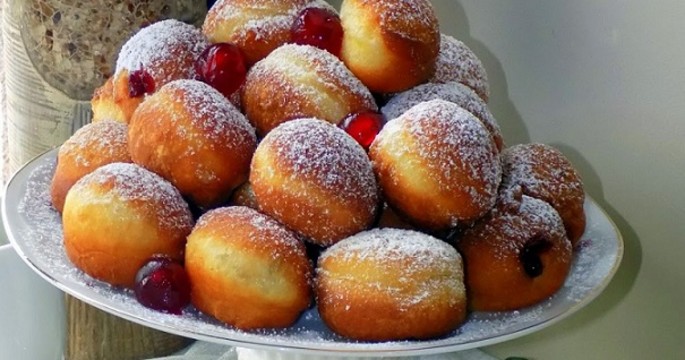 We waited impatiently for the first batch to be ready, we would take one each, rolled it in fine sugar and would shovel it in our mouth and devour it. Once we satisfied our appetite, we would wait quietly for the bowl to be filled and then we started eating again. Doughnuts are very good when they are warm, but you can eat them cold as well.

The secret consists in the flour quality and in the preparation of the dough, which is made as follows:

The leaven is prepared, by mixing the yeast with a teaspoon of sugar and some lukewarm milk. The bowl is set near a source of heat, so that its content can rise. The eggs are then thoroughly whipped, the extracts and a pinch of salt are then added and whipped some more (with a mixer) until the sugar melts. In a larger bowl the flour is sieved and the yeast, which has risen in the meantime, and the whipped eggs are added to the flour. The ingredients are mixed by hand until the dough becomes homogeneous. Gradually add lukewarm milk and knead the dough by hand until it becomes elastic.

Leave the dough to rise for 1 hour in a warm place of the room. After 1 hour, the dough is set on a wood board sprinkled with flour, divided into two parts and each part is stretched with a wood rolling pin, until the sheet becomes thin enough. The sheet thus obtained is cut with a round shape, making several circles. On half of the circles obtained put 1 tbsp of plum jam/jam/confiture, and use the remaining circles as lids, to be placed on top of the jam. The edges are coated with some milk and gently pressed by hand so as not to stick.

Leave the doughnuts thus obtained to rise for another hour, so that they double in volume and become very fluffy after frying. Heat some oil in a deep pot and fry the doughnuts until they are toasted on both sides. Take the doughnuts out and place them in a bowl with paper tissues underneath to absorb excess oil. Finally roll the doughnuts in vanilla sugar as you like.

Eat them warm, while still fluffy and delicious.