A literary café of the postwar bohemian artists society, a heritage monument and a luxury place of the Bucharest of today 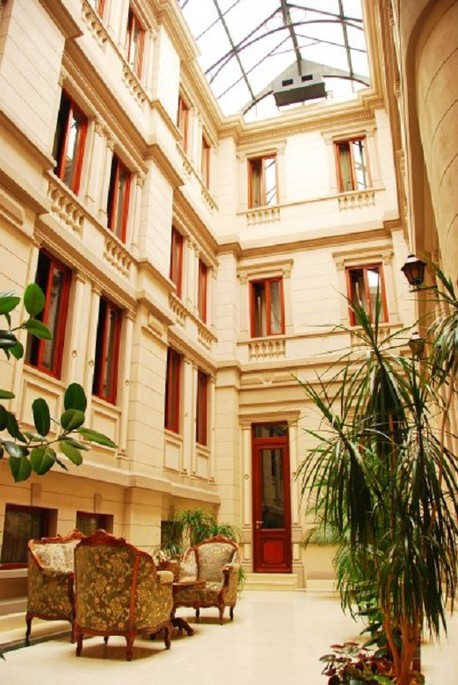 Around 1852, on Calea Victoriei of the old Bucharest was opened a confectionery which would become one of the most popular in Europe.

The best „saraylia, baklava”, sorbets and other Oriental goodies could be found here in the confectionery „At The Two Brothers, Constantin and Grigore Capşa”. Later, the candies of high quality chocolates, the chocolate, the cakes, some imported from France others prepared here, would bring the fame of the confectionary across Europe. Some chocolates, based on a unique recipe, were so popular that rich people of the great capitals sent special couriers to come and get them.

Since 1886, to the pastry was added a hotel and a „Consuming Salon” which became the famous „Capsa Cafe” frequented by the Romanian politics elite of that time and journalists who were coming here to collect information for the political and gossip articles.

After 1932 Capsa became a „café of writers and artists”, „the only intellectual café on Calea Victoriei”, as the poet Tudor Arghezi, a loyal customer of the café, said. „Casa Capsa” hosted great receptions with notable political and artistic world of the interwar Europe. From here has passed the generals Gamelin and Joffre, the French President Raymond Poincare, artists like Sarah Bernard, Josephine Baker, George Enescu, Enrico Caruso, Pietro Mascagni, the tenor Joseph Schmidt and the cinema actor Harry Baur.

The Austrian newspaper „Neue Freie Presse”, wrote: „The Capsa terrace is a point of view on the universe.” After WWI, the cultural elite gathered here from all over the country, transforming the status of an „aristocratic public house" in a „bohemian café”.

The „Capsa Hotel” opened in 1886, but it was originally a guest house for the parliamentarians outside Bucharest. Later became one of the most luxurious and rated hotels. In 1908, the British newspaper, John Bull British, wrote that it is „one of the best hotels in the world”.

Nowadays, „Casa Capsa” has been declared a „heritage building” and has been restored, succeeding render the atmosphere of the „aristocratic period”. With a special architecture and outstanding decorations, with sumptuous chandeliers and furniture, „Casa Capsa” is again again a luxury establishment. It consists of a hotel, a restaurant, a confectionery and a café.