Some researchers believe that the rock formations of the Sphinx and Babele are the result of a bad weather but at the moment there is no solid scientific evidence to explain this phenomenon. 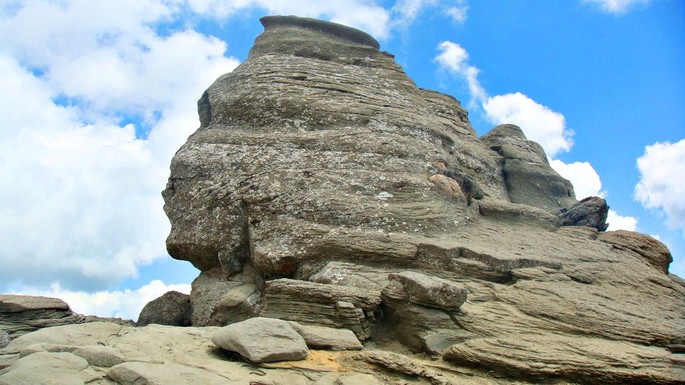 Bucegi Mountains give us some sublime trails where walking becomes a pleasure. The crisp, clean and cool mountain air, the picturesque landscapes untouched by time seem to throw a veil of mystery over the Southern Carpathians.

The Sphinx is a natural monument located in the Bucegi Plateau, at the altitude of 2,216 meters. It acquired this name in 1936 because it resembles a human head and the Egyptian Sphinx of Giza. This is a very impressive block of stone, measuring 8 meters in height and 12 meters in width.The Sphinx was photographed for the first time in 1900 but from a front position, not from a lateral one, as it usually appears in the well-known pictures.

The easiest and fastest way to reach the Sphinx is the cable car from Buşteni, a small mountain town in Prahova County, which can take you to the top of the mountain. This route has a length of 4,350 meters and it can be crossed in about 15 minutes. The tourists who want to spend a night in the peace and quiet on the peaks of the Bucegi Mountains, near the Sphinx, can stay at Babele Chalet.

There are many theories and legends concerning its formation but at the moment there is no record of an official document regarding the origin of this megalithic monument. The researchers believe that it is the work of wind, water and the constant frost and defrost. So far there is no solid scientific evidence to explain this phenomenon. Thus many legends emerged, yielding stories about this rock which is said to be an Axis Mundi (a center of the world), the most important energy center of the Earth.

Near the Sphinx stands another group of rocks eroded by weather called Babele. These formations nicknamed "The Cyclopean Altars from the Caraiman" and placed at 2292 meters altitude are devoted to the Earth and the Sky, to the Sun and the Moon, and to Mars, the god of war and of agriculture. This monument is a mushroom shaped rock formation. There are of course many legends and theories about its origin. Some say that Babele was a shrine where the Dacians brought sacrifices to their gods.

From the Bucegi Plateau, where these rock formations can be found, the tourists have a splendid view on the Prahova Valley. Also, from here they can hike up to Omu Peak or to the Heroes' Cross on Caraiman Peak. Words can hardly describe this wonderful place and the wild beauty of the Bucegi Mountains. The megalithic monuments shrouded in mysterious legends are joined by the breathtaking, fascinating landscape and by many tourist attractions. For more information visit the websites www.muntii-bucegi.ro  and www.babele.ro .

Trajan's Bridge over the Danube
Read the latest Places of interest