The fortress had different names throughout history, in addition to Räppes in the Saxon dialect, was also named Kőhalom or Cohalom Fortress, which means "stone heap" 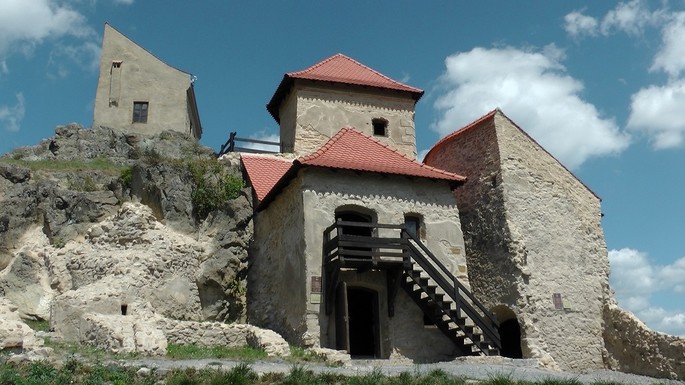 The Rupea Fortress in Brasov County is located at the crossroads between Transylvania, Moldavia and Wallachia. The fort served as the last refuge of the Saxon revolted against King Charles I of Anjou of Hungary, but throughout history also had other destinations, such as real representation during the reign of Transylvania, being directly influenced by history of the area and the Saxon community. Throughout history, the Rupea fortress served as a refuge for the people of the surrounding villages during the repeated attacks of the Tatars and Turks.

The fort was built on a basalt rock at a height of about 21 meters above the city's central square. It was built in three stages and the final form can be likened to a snail or an ascending spiral which covers an area of ​​about 10,400 m². The entire architectural complex is divided into three parts: the Upper Fortress, dating from the 14th century, the Middle Fortress, built in the 15th century, and the Lower Fortress, which was built in the 18th century. The first mention of the Rupea fortress dates back to 1324 and refers to a rebellion of the Saxons.

In the 14th century, the Saxons built the Upper Fortress on the ruins of a Dacian fortress, known as Rumidava. The fortress had different names throughout history, in addition to Räppes in the Saxon dialect, was also named Kőhalom or Cohalom Fortress, which means "stone heap". The Upper Fortress, the highest and oldest part of the fortress, hosted in the 16th and 17th centuries approximately 100 houses, cellars and spaces for food reserves. It retains some buildings, such as "the upper room" or "the new room."

In this part of the fortress, the walls and buildings of the city were built directly into the rock, or rather, as an extension of the basalt, which shows the great skill of those who built, given the technical means existing at that time. This combination has allowed durability for centuries until the restoration of 2014, defying somehow time. It is the highest part of the fortress and with maximum visibility and opening on all sides.

The gateway to the Middle Fortress, which used to be locked with a metal gate, the so-called hersa that rose and fell, is a system used also in other fortresses of the Bârsa region. Here can be seen the Powder Tower, the Shadow Tower, the Scouts Tower, the Chapel built by Andreas Lang, who undoubtedly has had an authority in the area, since it has built from his own money to take refuge there with his family during the sieges. On one side of the building, namely the inaccessible side of the fortress in case of attack, is preserved a small door, called the Gate of Spies, used by the city’s spies.

It still retain the room of dignitaries with administrative and political powers in the region, representing the Hungarian authorities, the Stubborn Tower, the Pentagonal Tower, but also a semi-circular wall that is a specific medieval defensive element called rondela. It stands somehow outside from the fortress structure to have a better visibility and a better functionality in terms of defense.

The Lower Fortress with the military warehouse, the Servants Tower, the Pentagonal Tower, the Tower of lard and the Tower of the Gate are the most vulnerable to attacks. There is also the fountain of the fortress of about 41 meters deep, essential for the survival of refugees during sieges.

Its strategic location has ensured its existence and survival over time, and although it has been attacked several times, it has never been conquered. Today in Rupea fortress dominates the skyline with its presence, earning proudly the emblem of the city.