".... it is Transylvania alone - where nature has proved to be, in the end, more generous than in many other countries - Transylvania, with all its rarity, is hidden in the dark" (Johann von Fichtel Ehrenreich) 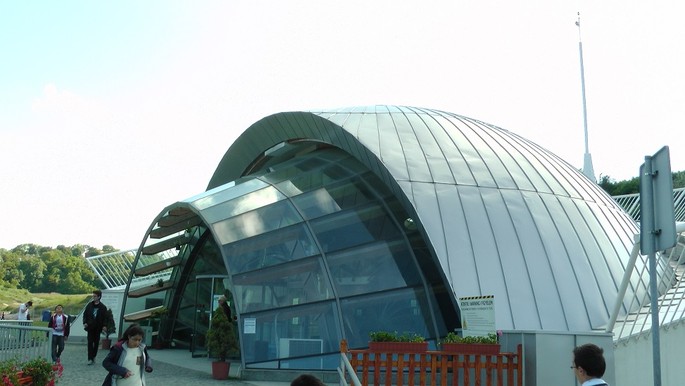 The lights from the Franz Iosif gallery  hat give the impression of melting on the salt walls, the air currents and a tunnel whose end no one can see introduce in an unreal world.

The salt field of Turda is formed about 13 million years ago that peaked in the 17th century, during the of Habsburg rule, when they started to expand the salt extraction works that leads to the enlargement of the Terezia mine.

Given the accelerated work, the mine was getting bigger and bigger, and the transport of salt to the surface became increasingly more difficult. This is why in 1853 they began to work on the construction of the Franz Iosef tunnel in order to facilitate the transportation of the salt to the surface, a tunnel that is almost 900 meters long. At the same time, there were created two other mines, Rudolf and Ghizela.

And so the salt cutters were passing from a salt mine to another, extracting the salt with the help of horses, recycled by the cavalry. It must be said that not everyone could become a fossores that stands for a salt cutter but only those who were the best in the craft, those who were ready anytime to sacrifice himself in order to unearth the precious mineral. The work in the mines was very hard because they worked equipped only with a chisel, a hammer and a pickaxe. And with all this primitive work, the fossores managed to create, over the years, real works of underground art in which the imagination of architects and the will of nature led to perfection.

After the mine was closed, it was remembered by the people only during the bombings of World War II when they used it as a shelter and then they used it as a warehouse for cheese until 1992. From 1992 onwards it becomes a tourism objective and in 2008 experienced a radical transformation through an investment of six million euro that led it among the most beautiful objectives in the world and certainly one of a kind.

The principal mines of Salina Turda are: the Iosif mine, the Rudolf mine, the mine Ghizela, the Terezia mine.

The Iosif mine was functional between 1740 and 1900 and was named as the Austro-Hungarian emperor who visited Transylvania in 1773. The structure has a depth of 87 meters and a diameter of 67 meters, and because it has no connection with other mines, the sound propagates in at least twenty echoes. This is a room in which tourists test the strength of the echo sound.

The Rudof mine was functional between 1867 and 1932, with a length of 80 meters and a width of 50 meters It is a huge trapezoidal cavity that opens before the eyes of tourists, who can enjoy a wonderful view of a space equivalent to 13 floors. A glass elevator takes visitors back in time to a world of dreams.

The Ghizela mine was functional between 1857 and 1932, and was cut in the trapezoidal shape according to the new methods of exploitation that do not allow   infiltration of water and air in the cavity. However, the Ghizela mine is set aside because the fossores have discovered the old salt mines, and so, the work is moving in the second mine named Ghizela II. The latest mine was declared a geological preserve with the most beautiful crystals. By the time the mine was partially flooded and water infiltrations have created a unique show of crystals stalactites.

The Terezia mine, the oldest mine of the Turda mining complex and it is undoubtedly the stunning show from the salt. Here, the extraction of salt, which started in 1690, has left an immense bell-shaped cave measuring 112 meters high and 87 meters in diameter, with a lake 8 feet deep formed by infiltration of the water at the base of the mine. In the middle of the mine there is an island of residual salt that has been transformed into an island of recreation to admire a "cascade of salt" located at the top. To pass the time it is possible to rent a boat for a ride on the lake.

Besides the sightseeing tour, in saline there are several areas dedicated to sports and a SPA. The temperature in the salt is about 12 degrees.

For more information see the official website of the Turda salt mine: salinaturda.eu.